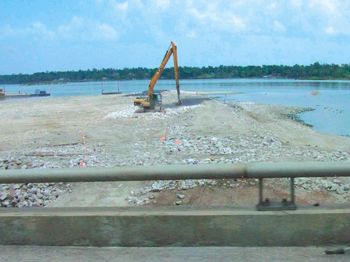 HIGHLANDS  About 60 interested residents of the Highlands and Channelview are attended a briefing last Wednesday evening, held at the San Jacinto Community Center in Highlands.

The meeting was hosted by Jackie Young, environmental activist with the San Jacinto River Coalition, and TexansTogether.

Young had contracted with an instructor of hers, Dr. Kathleen Garland, to prepare a report on EPA guidelines for dealing with toxic waste sites, as applied to other locations around the United States.

Garland teaches at the University of Houston Clear Lake, and is a Geologist and Environmental Management Expert.

Garland worked from existing data, on how the federal EPA had dealt with other toxic Superfund sites similar to the San Jacinto Waste Pits. Youngs hypothesis is that if the cases are similar, and EPA has required removal of toxic materials, then they should call for a similar solution in the San Jacinto River, therefore treating this in a similar method as others.

Young said that a final decision will be made by the EPA this spring, since the National Remedy Review Board is meeting in April, and announced in a Final Report in September 2015.

This approaching deadline has caused Young to increase her public push for citizens to be involved and concerned, as evidenced by articles recently published in the Texas Monthly magazine and the Houston Chronicle telling of her campaign to fully remove the toxic materials from the river. She said that in addition to the EPA determination of remedial action, there are also two lawsuits pending against the Responsible Parties to recover monetary damages for health injuries and property devaluation. One suit, led by attorneys Smith & Hassler, has engaged over 170 per sons who they plan to represent in court.

Young said that one of the key issues is whether the DSHS, or Texas Department of Health Services, would conduct a health study of sickness in the area. DSHS said they are preparing a Cancer Cluster study from existing statistics, but do not plan an on-site survey of health. Young said this is not satisfactory, because it is not specific enough, nor focused on a small enough geographic area. The data covers everything from Baytown to Humble.

The study made by Dr. Garland identified seven sites in the U. S. similar in toxins and geography to the SJR Waste Pits.

They needed to have similar contaminants or COCs such as dioxins and furans; they had to be a tidal basin site; sediments had to extend to a river bottom; and seafood consumption was a factor, with signage advisories.

Garland studied over 400 sites, to find 7 that met the criteria. She found that in all these sites, if the dioxins were highly concentrated, i.e. above 1 part per billion, the EPA chose to fully remove the material. For lower levels, they would accept a permanent cap, often a concrete block mat.

Garlands conclusion is that this solution must be followed, to be consistent with the EPAs own National Contingency Plan, i.e. full removal of the highest concentrations, and cap over lower dangers.

The audience contributed questions and their own experience, after the presentation.

One woman said that her medical bills were $3000/month and she felt that her health was affected by the waste pits.

Another said her son had attended San Jacinto Christian Academy in Lynchburg, which drew well water near the river, and that he had developed non-hodgkins lymphomia while he attended. Later, this ceased when he was not at the school.

Pam Banta said that one goal of the Coalition is to recover some money from the Harris County lawsuit for a mobile screening van to test residents health, and also to provide piped city water to homes that are now on wells that are possibly contaminated. The suit recovered $29.2 million.