Along with the data was an unprecedented announcement for TX DSHS. In over 400 similar database investigations, this is the first time that the State of Texas is actually going to further investigate the health of specific communities. This is not only a victory for the San Jacinto River Coalition and residents of East Harris County, who have been advocating for the study for several years, but a major victory for public health in the State of Texas.

In 2011, the San Jacinto River Coalition began begging DSHS to study the health of Highlands, TX. Though they werent sure what was making so many local residents develop cancer, they werent convinced that it was all by coincidence. In 2014 DSHS announced that in response to community concerns, they were going to do a cancer database investigation. The leader of the Coalition began assisting DSHS as a community representative, relaying crucial local information that shaped the parameters of their investigation.

Heres what they did:

DSHS investigated cancer database information from 1995 to 2012 for populations along the San Jacinto River, in the inundation zones of the River. This area encompassed 38 census tracks. They looked at the data for the area as a whole and they looked at each census track individually. DSHS investigated database information for 17 types of childhood and adult cancers.

Heres a summary of what they found:

Of the 17 types of cancers investigated, 14 types came back at a statistically significantly high rate in at least one census track within the study area.

 The number of childhood brain cancer, leukemia, melanoma, and glioma cases were statistically significantly higher than expected in census tracts 2519, 2323, 2330, and 2520, respectively.

 The number of childhood retinoblastoma cases was statistically significantly higher than expected in census tracts 2328 and 2529.

 The number of male breast cancer, kidney cancer, and leukemia cases among all ages were each statistically significantly higher in 1 of the 38 census tracts.

 The number of liver, brain, and cervical cancer cases among all ages was statistically significantly higher than expected in two, three, and five census tracts, respectively.

Above findings sourced from Texas Department of State Health Services Assessment of the Occurrence of Cancer East Harris County, Texas. The full report can be found at www.dshs.state.tx.us/epitox/CancerClusters/East-Harris-County- 2015.pdf

With DSHS taking the next step and setting up a panel of experts to conduct a feasibility study for an epidemiological study, the San Jacinto River Coalition hopes that a source is determined so it can be eliminated and future generations will not face the same risks far too many already have. 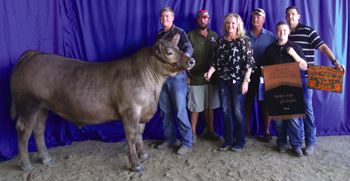 CROSBY  On the books is a success story that is mostly owed to the selfless dedication of a group of Crosby families that make possible the Crosby Fair & Rodeo.

This year the 4-H Livestock Auction brought in a record over $303, 000 even as at press time the tally was being counted.

The Pink Heals was awarded $150, 000 from the Tough Enough to Wear Heals Committee and the American Cancer Society was awarded $10, 000 to fight cancer nationwide. Pink Heals helps those battling cancer with paying bills and necessities locally while they fight cancer.

Top Rodeo Hands, a recognition for most helpful youth to the Crosby fair & Rodeo went to Darion Klise as Senior and the junior catagory went to Blake Larkin.

Bob Ward received an award that his group Eastside Veterans started a few years ago. The Citizens Recognition Award goes to the person most outgoing in community involvement. Last years winner John Lindsey, of the Crosby ISD Board of Trustees, awarded Ward the plaque.

They blindsided me, said Ward immediately after, I was so surprised to win the Citizen of the Year Award. I had no idea it was coming. I have worked in this community because I feel like the community paid my salary for over 20 years by shopping local & shopping at Bobs Computers. I have to thank my wife Sharon for putting up with the time I take away from our life to do things. I thank God for blessing me with my health so I can help where I can. I thank all of those responsible for presenting me with this award. I am honored to to have received this award. I love Crosby Texas. Thank you & God Bless our community.

Saturday night the audience packed the rodeo and the concerts by Hill Country Jane and Kevin Fowler brought even more inside the Rockin C.

HUFFMAN  A Crosby woman shot a man with a knife that demanded her purse and money at the Exxon Station near Saddle Creek Subdivision on Friday, June 5.

According to Harris County Sheriffs Deputies, Casey Price, 43, pulled his old GMAC truck up next to a relatively new Toyota Truck then entered that truck that belonged to a local woman as she was checking her e-mails on her phone while fueling her truck.

According to the woman talking to deputies, he pulled a knife from under his shirt pointed it at her and said, You are going to give me your money and pocket book.

She calmly said very calm and collected to him, Okay, hold on  let me get my purse.

She pulled a pistol and discharged it three times at point blank range. Casey Price was struck once in the shoulder and once in the side. according to Deputy Thomas Gilliland for the Sheriffs office.

Reports say he turned and ran the two steps toward his truck.

The woman exited her truck prepared to fire again if the situation escalated, the suspect seeing her exit turned and ran north on FM 2100. When he had run over 1/4 mile, he collapsed in front of the Sierra Madre intersection. About this time a deputy had caught up with him. He had lost a lot of blood and Harris County ESD#5, the ambulance service for Crosby rolled up at about the same time as the deputy.

He is facing charges of aggrieved robbery with a deadly weapon.

Proper training for a Concealed Carry License appears to have been the distinction between this case and others. She would have reacted as she was trained to a criminal situation involving weapons.

Some ask if the defendant had learned his lesson. 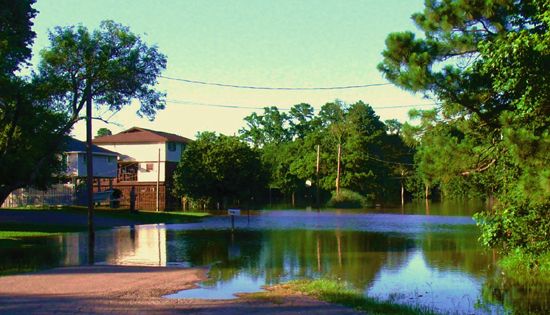