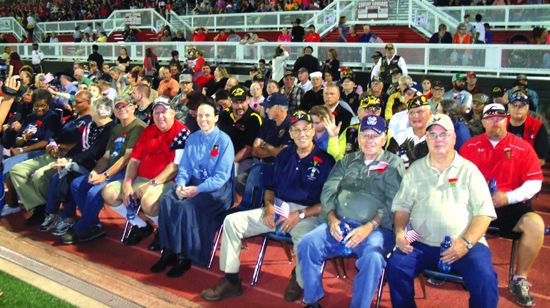 CROSBY  The Eastside Veterans Celebration hosted events last week to educate locals on what veterans contribute and honor the veterans themselves.

Efforts to do this included year long meetings, contributions of time and materials and the sale of raffle tickets for a quilt and three firearms.

Attendance was off this year as rainy weather not only negated Saturdays parade but kept many at home tending to their flooded locations from the previous weekend.

This year the winners of the raffles are Betty Michalsky for both the automatic rifle and the guilt, Dixon Davis won the .380 pistol and Justin Gilmore won a Henry .30-30 rifle.

Events include the Red, White and U. celebration at the High School followed by a fireworks display.

On Friday, thirteen entries cooked for the Veterans Cook-Off and the Flag Retirement Ceremony behind the David H. McNerney American Legion Hall Post 658 was fairly attended.

Barbecue was the fair on Saturday as local veterans observed the posting of the colors, the M.I.A. ceremony, a speaking program and military protocol was observed. Open ceremonies were brief but thorough. The raffle was held an hour earlier but few were still in attendance.

The list of contributors continues to grow but there are examples of individuals that contributed beyond the call of duty. Examples like Arlens Grocery sending over 15 loaves of bread at the last minute upon hearing there was none for the veterans accepting no payment and Terry Walkup saying it is the least we can do.