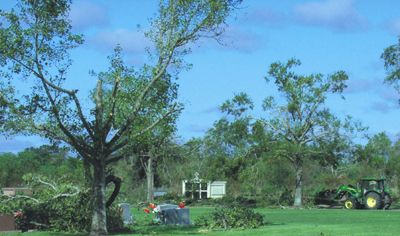 HIGHLANDS  Last Saturday, some homes near the river were flooded and the river could be measured to have reached about 8 feet higher than normal before cresting.

An EF-0 tornado somewhere above 75 miles per hour and below 85 m.p.h. struck the northern perimeters of the area at about 5:00 a.m. Saturday. The twister downed power lines and closed FM 2100. One of the locations that it touched down was Sterling-White Cemetery and Funeral Home.

Jeff Moore, Managing Partner, of the local cemetery stated early Sunday, We have close to 50 trees down, damage to the grounds, several monuments knocked over and the cemetery pavilion was destroyed. Thankfully the funeral home and main office had only surface damage to some posts. We have a tree service starting to work on Monday along with our maintenance crew to get the roads clear and then they will begin section by section clearing debris and re-setting monuments. Due to all the rain this is going to take some time to fix. We have to be careful because the trees weigh a lot, monuments weigh a lot, and the equipment used is extremely heavy. We dont want to create a bigger mess and tear up the grounds worse than what they already are. For safety reasons, we have closed the cemetery until the tree service can get in because there are several limbs just barely hanging on and monuments that are leaning. We appreciate all the concern and we will have everything fixed and cleaned up as soon as possible.

It appeared some damage was done to the bell tower.

BARRETT STATION  Just south of the Barrett Grocery, a Harris County Sheriffs barricade was erected on FM 2100. Getting to Highlands would be a challenge.

CROSBY  The thirteen inches of rain measured by the Harris County Flood Control District here on Saturday was manifest in the Weingartens Shopping Center with more than four inches of water on the floors of local shops. Monday, many stores were still recovering and shop vacuums running were a common sound.

There have been reports of structural damages due to high winds from tornadoes that touched down in areas including Pasadena, La Porte, Highlands and Friendswood.

Damage assessment teams from Harris County (for unincorporated areas of the county), the City of Houston, and City of La Porte went into hard-hit areas after heavy rainfall subsided Saturday, and will continue to meet with residents who were affected by heavy rain and winds.

It is not too late to report damages to your home or property. Below are resources and contact information for residents affected by flooding and wind damage.

Affected Harris County residents are urged to report house flooding by completing a Flood Survey as soon as possible at the Harris County Office of Homeland Security and Emergency Managements website at www.readyharris .org/go/survey/1829/11787/

The Flood Control District has a Storm Center at www.hcfcd.org/storm-center with helpful, printable resources, including a guide on how to create and implement a family flood preparedness plan and a family emergency kit checklist.

REMINDER: When faced with a flooding situation: STAY PUT wherever you are, unless your life is threatened or you are ordered to evacuate and do not drive or walk into high water areas.