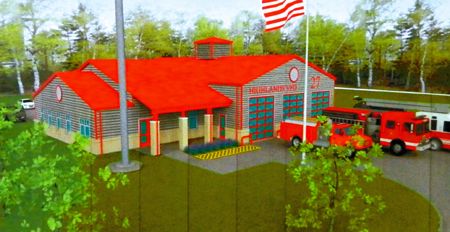 HIGHLANDS  Construction has started on a new fire station #2 for the Highlands Fire Department, according to Chief Harvey Little.

The new building is going up on the same site as the previous Station #2, which has been demolished.

The building is a one story steel frame and masonry building that will house up to 5 emergency vehicles. These include a brush truck, a tanker, an ambulance, and several pumpers.

There are also sleeping quarters for eight, so the station can be fully staffed 24 hours, according to Chief Little.

The station is being built for ESD#14, the taxing body for the fire district. It will cost approximately $2 million dollars, of which the ESD will pay part, and the rest will be financed over a 10 year period. This is similar to the financing of Station #1 on San Jacinto Street by the railroad tracks, which is now fully paid off.

The building is approximately 7500 square feet in size. It also includes a reception area for the public, a Chiefs office, a conference room, a Day Room, and an adjacent kitchen. There is also storage, mens and womens toilets and showers, laundry area, and storage as required.

Construction of the building is expected to be complete by the end of the year, and in the meantime most of the equipment that was previously housed in the old Station #2 has been moved to Station #1. A communication tower that is at the back of the site will not be moved, and continue in operation. Contractor for the building is Cox Construction of Baytown.