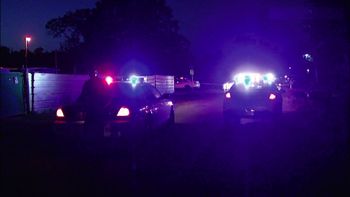 BARRETT STATION  As many were preparing for the Homecoming on Friday and Saturday night, this small bedroom community was shocked by gunfire last Thursday.

According to Media Relatons of the Harris County Sheriffs Office, on July 14, in a trailer house at the intersection of Locust and Pecan Avenue two or three suspects entered the residence from the front door and began shooting the three occupants it being nearly 7:45 p.m.

When a forth occupant arrived from the car wash he too was shot down by men coming out of the trailer house.

One of two deceased say the invaders demanded money.

After the shooting occupants, suspects fled in a small silver four door sedan. It has yet to be announced if any items were taken from the residence.

Waylon St. Romain, 26, died at the scene, Dameon Griffith, 23, was transported to East Houston Hospital where he expired from his injuries. Carl Potts, 52, and Herbert Singleton, 32, were taken to hospitals and are expected to survive.

In the crowd surrounding the residence after the shooting neighbors spoke of the location being a drug house. And detectives believe the shooting to be drug related.

One witness told sheriffs deputies that a masked man approached the front door and when the occupant of the trailer house attempted to push the masked man away that man began shooting.

Another witness described the suspects car as a silver or gray Nissan.

Three were shot inside the residence and one was shot outside the residence, according to Media Relations. The Harris County Tip Line is (832) 529-6797 for anyone with information wishing to remain anonomous.