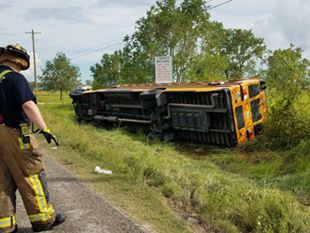 At the scene HCESD#5, the ambulance service for Crosbys Coordinator of Medical Services, Christy Graves made this statement, We received a 911 call concerning a major accident with high mechanism, multiple callers. A school bus had rolled onto its side.

The students all gotten out, all safety precautions worked perfectly. We are thankful of our citizens that have supported us all the way at such incidents. All the occupants were out of the bus thanks to the efforts of neighboring good Samaritans. We are grateful because the bus was in water. Fifty two students of a possible seventy one capacity were aboard at the time of the accident. The sixteen students and the driver were stable at the time. I called in seven ambulances, two from Crosby, Channelview, Baytown, South Lake, Highlands and Huffman they were taken to East Houston Regional Hospital and Houston Methodist San Jacinto Hospital.

Witnesses say the bus had swerved to avoid a collision with a car turning into a neighboring driveway. Parents were asked to wait at the Operations Center at that time.

Dr. Keith Moore said, When I drove upon the scene and saw the bus laid over in the ditch, my heart sank. I quickly received some relief when I realized that everyone was off the bus and then informed that no life altering injuries were apparent. Once the accident occurred the actions of the students, driver, first responders, Crosby ISD staff, parents and community was simply outstanding.

The accident is still under investigation by the Harris County Sheriffs Office Traffic Division.

We are continuing to review the accident and the events thereafter to ensure that we are taking all steps necessary to protect our children. concluded Dr. Moore.