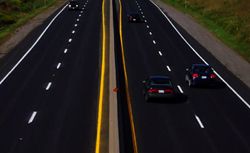 CROSBY  Latest word on the widening of FM 2100 from FM 1960 to South Diamondhead Boulevard is that the plans are still to divide the highway and currently, there is no funding for this project.

As survey work was being done on FM 2100 excitement was building among the community concerning the beginning of the purchase of 107 acres of right of way.

However, the project spokesperson, Danny Perez, of Texas Dept. of Transportation, indicated on Sept. 13 that for the section north of Crosby to FM 1960 mapping is underway to ready for R.O.W. acqiusition. There is no official time table on the project as funding has not been secured. 

When questioned on Sept. 15, concerning dividing the highway with raised medians as all but one of the speakers at the May 5 hearing were against, he said, We believe that is best, yes.

No public involvement is scheduled.

TxDOT defined the project to begin in 2017 as The proposed project would widen FM 2100 from a two-lane undivided roadway to a four-lane divided roadway. Five-foot sidewalks would be constructed on both sides of the roadway. The purpose of the proposed project is to reduce congestion and enhance safety by accommodating traffic volumes, which are expected to increase by approximately 57 percent on this section of FM 2100 in the next 20 years. The total project length is approximately eight miles.

The impact of the proposed divided highway is generally upon six residences, eight commercial structures, and two churches would be potentially displaced as a result of the proposed project.