Board elected for Crosby Fair & Rodeo 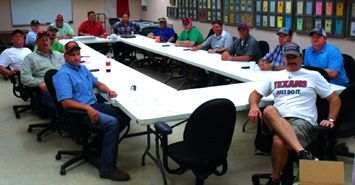 A director had previously stepped down and Roger Bobalik, Jr. took his post this year as a new director.

During the board Meeting after the membership meeting, the Executive Board was decided by the board members. Ricky Larkin was re-elected Chairman, Sonny Armstrong is again President. Ronny Ehrlich is First Vice President. Justin George is second Vice Persident. Secretary is Eddie Glover. Rick Loggins is again treasurer. Bill Busby is again General Manager.

Committees have yet to be appointed by the Executive Board but this will be decided at a later date.

Earlier this week the Fairgrounds parking lot was bermed to allow better drainage.