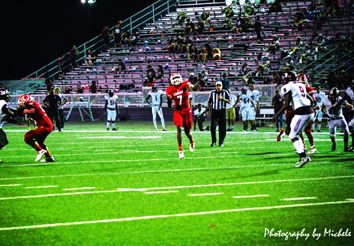 CROSBY  Houston Heights Bulldogs 6-A walked into The Jungle fully looking an average six inches taller and filling their pads out more than the Cougars but the first quarter taught everybody who was dominant.

The Bulldogs opening off-side easterly kick resulted in the Cougars taking possession on their 48 yardline.

Quarterback Mannie Netherly marshaled a 22 point first quarter before being finally injured in the opening of the second. It only took about half a minute and two downs for the Cougars to score first. Netherly screened to Terrence Wiley for 45 yards. Mannies second play of the game scored because he put a runner, Carlos Grace, where there were no defenders. The sprint to the goal stunned everyone following the backfield dazzle.

The Cougars defense was phenomenal, swiping a goal line pass, shutting down the run – playing keep away for four quarters minus one minute exactly. Thats when a Bulldog pass finally got their only score and with no extra point. That pass was very much like the interception in the third quarter, straight over the center. Plus, the Cougars snatched up four fumbles. The first fumble set up Netherly to Craig Williams on a 12 yard touchdown. However, the Bulldogs were ferocious now and it looked like they were holding the Cougars but Netherly showed why LSU pick him early. From fourth down and long yardage, Netherly sprinted 44 yards to touchdown. Cougar runners were reading the plays and taking advantage of mistakes and the Cougar defense did the same. There was four and a half minutes left in the first quarter after that scoring spree and a long time to go.

The Bulldog offense were as frustrated as the man with his new bride stuck in the hotels revolving doors. But, they had a defense, too, in spite of the implications of the first quarter.

I feel good, said Coach Jeff Riordan, I had figured we would struggle the first quarter and a half because they really are a good team, like Manvil-very good on defense. We executed some plays early, plays we had been working on from film, that we knew we could get. Had some injuries then. Some guys stepped up and played solid. I am really excited for the team, excited for the defense. Last week too; our defense has put us in a spot to win some ballgames.

Half the third quarter elapsed without incident when Crosby got a midfield goal.

When asked about the injuries to his first two quarterbacks Riordan said, The thing about this team is that we have guys that can step up. Mannie went down and Jake Howard came in and then Jake went down and Alex Louis came in stepping up. We do what we have to do. Its good to have kids that prepare so that if their number is called they are ready to go. 