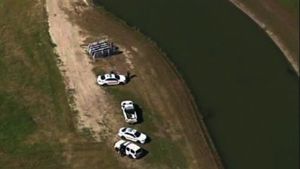 HIGHLANDS  Authorities were called to the fresh water canal at S. Main Street, near 4 Corners, on Friday morning about 9:45 a.m. after a report of a body floating in the canal.

With the help of a dive team, and the Highlands EMS, a body was recovered that had washed up against the grating that keeps objects from going further down into the canal system.

The recovery team was not able to immediately identify the body as a woman or man, due to the fact that it appeared to have been in the water for some time, and had decomposed. The EMS team estimated that it might have been there for 4 to seven days. The body was transported to the Medical Examiners office in Houston for an autopsy.

As of Tuesday, the body had been identified, but the family had not been notified. This information will be released later, the ME said.

Deputy Thomas Gilliland of the Harris County Sheriffs office said this is an active investigation, and urged anyone with information to get in touch with the Homicide division, 713-274-9100.