HARRIS COUNTY  A bunch of money was spent to hold elections that determine the future of the area locally and only a stalwart few cast a ballot. It looks as if apathy is the overwhelming winner in the off candidate elections.

Consider that there are 15,730 registered voters in Crosby and only 1,245 turned out to determine one of the most important bonds issues for making Crosby ISDs future and one that could save tax payers 2¢ per $100 valuation. Actually it is 30 something votes less than the last bond election. As it went, 7.95% of voters turned out to determine if the district will sell bonds to match $109,500,000 for schools, land, buses and levy of tax payment.

So, 586 voted for the bond and 358 voted against it in the entire school district. At least 62% of the voters thought it was a good deal.

This year the legislature worked tirelessly to produce seven propositions. Some in detail seemed silly, others are a half step towards doing the right thing.

Voters took them seriously statewide. Proposition One exempted the partially disabled veteran or surviving spouse of one from property taxes for a residence homestead that was donated the property by a charitable organization or sold for less than market value. The proposition harmonized provisions in the Texas Constitution. It passed 110,111 to 15,776 or 87.47% to 12.53%.

Proposition 4 allows the legislature to set a waiting period before the court may enter a judgement holding a statue unconstitutional. This passed 82,221 to 40,390.

Proposition 5 allows professional sports teams to have their charitable foundations to host raffles. It passed 81,195 to 39,785.

Proposition 6 provides an exemption from property taxes to surviving spouses of first responders killed or fatally wounded in the line of duty. But if only crippled they need to pay in full. It passed 106,323 to 18,683.

More turn out to vote for representatives generally, to be held in two years.

END_OF_DOCUMENT_TOKEN_TO_BE_REPLACED 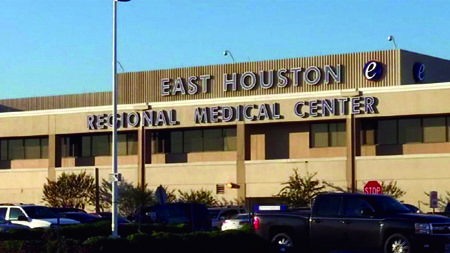 HOUSTON – East Houston RMC has decided to permanently close its facility on I-10 near Uvalde, due to repeated damage from flooding of Greens Bayou.

HCA Healthcare Gulf Coast Division is announcing today that East Houston Regional Medical Center, a campus of Bayshore Medical Center, will not reopen due to its history of flooding as well as recent extensive damage from Hurricane Harvey.

The hospital has been closed since all patients and staff were moved to safety two days before Harvey made landfall. Although it is equipped with flood gates designed to withstand three feet of water, East Houston Regional Medical Center took nearly six feet of water during the storm.

The hospital is located in a low lying area, and prior to Harvey, was severely damaged by flood waters in 2001 by Tropical Storm Allison as well as by Hurricane Ike in 2008. We considered potential options to continue to treat patients at the facility; however, given this history and the likelihood of future flooding problems, we determined that the most prudent course is to close the facility. We have a long history of caring for the East Harris County community, and through nearby Bayshore Medical Center and Clear Lake Regional Medical Center, we will continue to do so.

Physicians credentialed at East Houston Regional Medical Center have privileges to practice medicine at Bayshore Medical Center, and we will continue to assist those physicians interested in practicing medicine there and seeing their patients at the facility.

For over 40 years, HCA has been treating patients at East Houston Regional Medical Center. Though the facility has been damaged in the past, we have rebuilt many times. Weve endured three floods since 2000. Our team looked at every potential option for continuing to treat patients at the facility. In the interest of safety, we have determined there was no way to continue operations at this current site. Its just not the safest way forward for our patients or our employees. We remain committed to the East Harris County community, though. Patients may still seek care at our Bayshore Medical Center and Clear Lake Regional Medical Center facilities, both of which are close by.

In addition, management and human resources teams are working closely with East Houston Regional Medical Center employees to identify career opportunities in one of the 16 facilities within the HCA Healthcare Gulf Coast Division and throughout HCA.

It was a difficult decision not to reopen East Houston Regional Medical Center, but one we are confident best serves our patient population. HCA Healthcare Gulf Coast Division remains firmly committed to the East Houston community and Bayshore Medical Centers essential role as a community hospital serving East Houston and surrounding communities.

END_OF_DOCUMENT_TOKEN_TO_BE_REPLACED 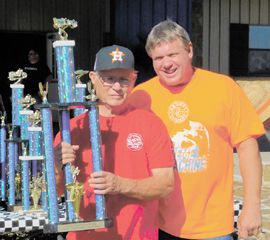 A car show, a bunch of inflatables and games for the kids, Crosby Volunteer Fire Department bringing out fire trucks and cutting up a S.U.V. for us, mud bog racing, lots of food vending and plenty of greeting and fellowship with the neighbors and friends made an event to remember and forget the hard times.

Toward the end of the afternoon, a mud spattered Rev. Keenan Smith looked guilt stricken as he confessed he had just drowned his friends truck in a mud bog. He spoke before the awards ceremony, I want to thank everyone for coming out to visit us today. We almost didnt have this event today. I think attendance is off from last year. It was only at the last minute that I said, yeah, lets go ahead and do it. We had gotten so caught up in everything that happened and the recovery that we didnt put the advertising and effort into this years Extreme Machine Sunday. We had hosted the rescue operations here, launched the animal rescue operations afterward, got so involved fixing and tearing out houses all over, especially in Huffman and Crosby. Then we started burying animals here. I felt like we were at our limit for awhile but I am glad I listened and went ahead and had it, it is a chance to come out and enjoy this great weather and enjoy a community event. So, I am going to turn it over now to some guys that know all about car shows. So we can recognize those that put tens of thousands of dollars into winning plastic gold at a car show and bragging rights. I bless all yall and thank you for helping let us enjoy this day.

The kids turned out some in costume, most in enthusiasm. Most adults took the opportunity to chat with brand new and lifetime friends.

Esatside Veterans turned out to remind all that Veterans Day is fast approaching and there is to be a parade and event that day.