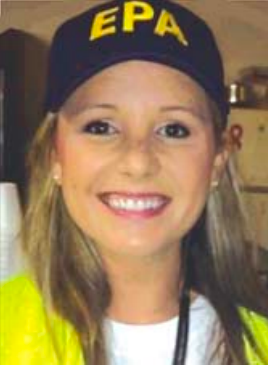 The presentation from EPA was made by Ashley Howard, the Remediation Project Manager for the Waste Pits. She was assisted by Janetta Coats, Lauren Poulos, and Heather Davis. Howard succeeded Gary Baumgarten, who retired after many years working on the SJRWP project. There were about 53 individuals on the Zoom connection, and 4 from EPA. Attendees included representative of TCEQ, Harris County Precinct 2, and others.

Howard started with a review of the history of the project, and showed some aerial photos of how the river has changed its course from 1966 to 1997 to 2006, and how the Waste Pits became eventually partially submerged. Then she stated that after the toxic pits were discovered in 1965, a plan eventually led to them being covered with a containment cap, with rock and a membrane in 2011.

Since then, the PRP (Potential Responsible Parties) have agreed to remediate and remove the wastes, and have been working with a consultant on how that might be accomplished. The original schedule for this work was developed after a Record of Decision was accepted in 2017. It called for the removal of 212,000 cu. yds. of waste material. It is now expected that at least 250,000 cu. yds. of material must be removed. The Final Design for the North and South Impoundments was due in 2021, and contract negotiation and remediation could start after that.

However, due to the discovery of deeper toxic material, and the unfeasability of the water treatability scheme, the engineering consultant GHD asked for a time extension of 160 days, and later another 270 days. EPA granted these, which means that actual construction of remediation will not take place until 2023, and the Final Design calls for a 7 year project schedule. One year of mobilization, 5 years of excavation in 5 work zones, and one more year of demobilization until the land is deemed safe and free of toxins.

Jackie Young Medcalf of THEA/SJRC commented on how “very frustrating to our group” these delays and extensions have been. It has now been about 10 years that the group has been working to remove the waste pits, and it looks like it might be another 10 years to completion.

Reasons that the EPA stated for granting the extension request include:

1. It has learned that treating the waste water in a flooded environment is “infeasible” and another method must be explored.

3. The original borings and sampling had “data gaps” and more information must be developed.

4. Work now starting on the Lake Houston dam and spillways may affect water levels around the waste pits. More information is required, and this may take time.

Most of the delay, Howard explained, involves the Northern Impoundment site. Work on the Southern Impoundment may precede the North, because the Final Design simply calls for a “cut and fill” technique, where toxic material can be excavated with a backhoe, loaded on trucks, hauled away, and clean fill material would replace it. The amount of material to be removed is only expected to be about 24,600 cu. yds. and the depth only 10′. Only a small area would require cofferdams to hold back the river water, according to the Final Design. The Final Design was approved on May 7, 2021 and now will move to the next step, negotiations for an “enforcement document.” It was revealed recently that the responsible parties for the two sites are different. The Northern Site PRP is Waste Management and International Paper, and the Southern Site PRP is International Paper.

Howard said that a TWG, or Technical Working Group, meets monthly to coordinate the responsibilities of different agencies in the area. This is becoming more important, since not only the work on the Lake Houston spillway affects the site, but TXDOT plans in the near future to replace the I-10 bridge over the river with a higher, wider new bridge and highway. TXDOT is also repairing, replacing, and adding to the bumpers or Dolphin structures in the river on either side of the channel, that are near the waste pits. That work is scheduled for this summer. The bridge replacement work is due to start in 2025, long before the Waste Pits remediation is complete. The two projects will exist beside each other, with potential for interference.

The consultant is now reviewing his plan for the Northern site, with concern on these problems:

It is anticipated that the GHD consulting firm is going to recommend a double wall sheet pile cofferdam, a much larger structure than originally anticipated. This is one of the reasons the schedule has been moved back. Another problem to consider is that any cofferdam must be removed later, and now it has become larger and deeper than originally planned. EPA has called for 30 more borings as part of the new study.

DOUBLE WALL COFFERDAM WILL BE REQUIRED FOR A DEEPER EXCAVATION.

In the Q & A session that followed, Howard said that if an environmental spill or disaster occurred, the national Emergency Response Center can be reached at 800-424-8802 and they handle all types of emergencies and are in contact with all relevant agencies, local and national.

Question: What interaction does EPA have with the barge companies?

Answer: None, we do not have jurisdiction. The Coast Guard does.

Question: Where will the waste go for disposal?

Answer: We will know when the Final Design is submitted.

Question: Will workers be protected from the Dioxin?

Answer: There will not be any actual contact with waste, and Dioxin must be touched.

Question: Why do you leave the waste material in place now?

Answer: It is safe under the cap. It doesn’t leach easily, but sticks to the soil.

The Final Design for the Northern Impoundment is due Feb. 2022. Then an enforcement document must be negotiated, and the one year of mobilization and procurement will proceed. That means at best construction or remediation should not start until 2023. The Southern Impoundment may happen sooner, it is under study, said Howard.