CROSBY – Two memorial services last week marked the community’s sense of loss at the unexpected death of Lewis Spearman. Last Tuesday evening, the community came together for a memorial service in honor of Lewis Spearman, held at Crosby Church. Scores of friends came to pay their last respects, and to share some remembrances. And on Saturday, a large crowd gathered at the Crosby Fairgrounds for a benefit and reminiscences.

The Tuesday service was guided by Pastor Keenan Smith of Crosby Church. He spoke about his personal relationship with Lewis, and the unique qualities he had as an individual. His love of friends, joy of companionship and parties, and his interest in history. A slide show captured his moments in a Pirate costume at the Renaissance Festival, and as a Texan Patriot at the reenactment of the Battle of San Jacinto.

Pastor Larry Koslovski, who knew Lewis for many years through the Chamber of Commerce activities and board of trustees, gave a review of his life and his love of Crosby, its people and its traditions. He imagined Lewis in heaven working with his camera and tape recorder for the next story.

Others who spoke at the memorial included Gil Hoffman, the publisher of this newspaper. Lewis and Gil worked together for 27 years on the paper, and had a close friendship and working relationship, too. They both had roots in South Carolina, and swapped stories about the south.

Eddie Foster was one of Lewis’s closest friends, and shared some stories about their festive and sometimes raucous outings. These helped to see the full picture of his personality and how he could be friends with so many.

Bobby Horn, once a newspaper colleague of Lewis and Gil, and now a minister, gave a warm and moving description of what it was like to work with Lewis at the desk next to him, and the richness of their conversations.

Scenes from the Lewis Spearman Celebration of Life at the Crosby Fairgrounds, July 10, 2021

The Crosby community as a whole wanted to do more for Lewis, to express their loss, so they also scheduled a fundraiser last Saturday at the Fairgrounds. A large crowd turned out for good food, auction items, music by Eddie Foster, and games for kids and adults. It was truly a heartfelt expression of loss, with many sharing stories about Lewis. It was appropriate to learn that the funds from the event will be used for a scholarship fund, for a future journalism or communication major college student. Donations can still be made through VENMO or CASHAPP. Venmo: @Holden-Wright-2, or Cash App: $Hw713805. Mark the comment section “Lew’s Benefit.” 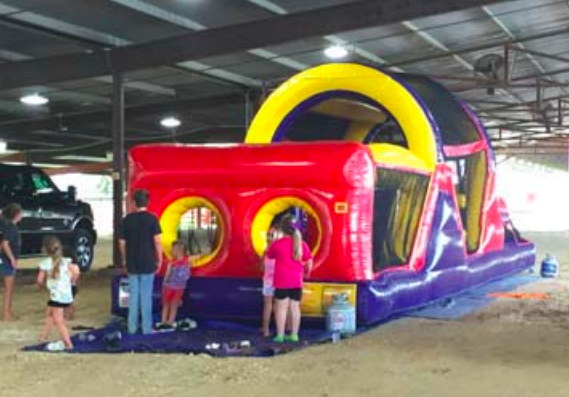