HIGHLANDS – After taking a year off for the COVID Pandemic, the town came to life last Saturday and celebrated a combination of Halloween and the 64th Annual Jamboree.

The Theme for the Parade was “Spooktacular” and some of the units and their occupants were decorated in scary costumes.

The Jamboree was somewhat scaled down this year, but nevertheless 25 units were in the parade, including the Parade Marshal, Goose Creek’s Superintendent Randal O’Brien, who was also the Highlands Chamber’s Terry Davis Award winner this year. 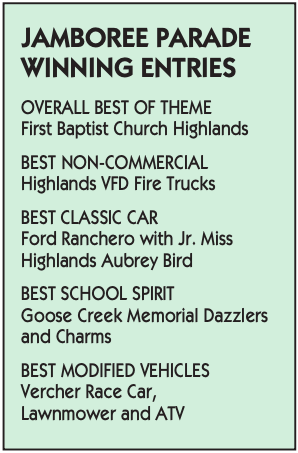 Prize winning units are listed in a box on Page 1 of this issue. Judges for the Parade were Emmelee Lopez, Jorge Moreno, and Jennifer Woods McCann.

After the parade, activity moved to the Highlands Elementary School multipurpose room. There was a silent auction, exhibitors booths from Precinct 2, and vendors with food and crafts.

The highlight of the day was definitely the Childrens’ Pageant, with Lil Mister and Lil Miss strutting on-stage to the delight of the audience, filled with family and friends. Several hundred attended the show, taking pictures and cheering for their favorite child or grandchild.

Emcee for the Pageant was Miss Highlands Haley Maxey, with the assistance of Pageant Chairwoman Jessica Woods.