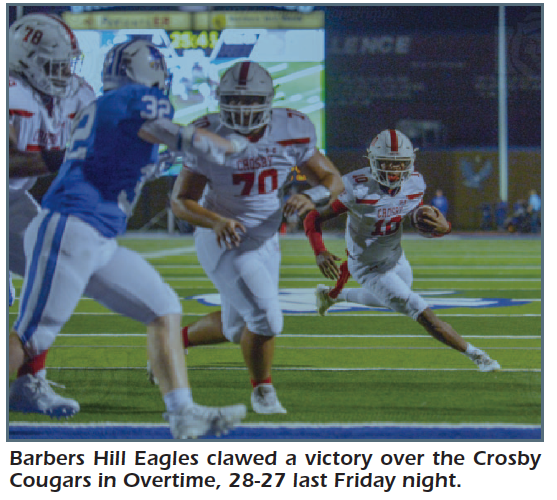 BARBERS HILL – Two rivals met Friday night in a thrilling football game, which ended in a victory for Barbers Hill. Coaching decisions and strong offensive play on both sides kept the fans on the edge of their seats.

Outstanding play by Crosby QB Cyrin Miles accounted for 293 yards (192 passing, 101 rushing) and RB Levi Fontenot carried for 76 yards. BH QB Kody Fuentes was 22 for 29 in passing with 388 yards. But the clincher was in OT, tied 21-21 he passed on the first play to bring the score to 28-21. Crosby scored shortly thereafter on a Myles run, and with the score 28-27 attempted a 2- point conversion, which failed when the Eagles defense held and stopped the run.