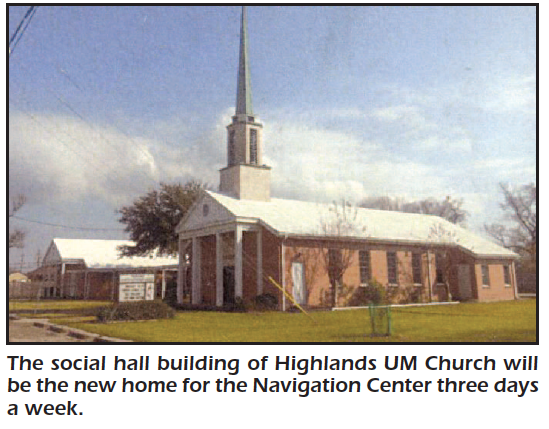 HIGHLANDS – An organization planning on providing services to the homeless population in East Harris County has decided to set up operations in several rooms of the Highlands United Methodist Church. Previously they had announced that they would be located in a residential property at the corner of Wallisville and Thompson Road, but that plan changed, according to the director, Tom Kelchner.

Kelchner’s organization is known as the East Harris Navigation Center for the Homeless, and is a 501c3 charity. Kelchner told this newspaper that they will provide food, clothing, general counseling, job training and placement, and life skills training to the homeless population they will serve, with the goal of helping them establish a normal life off the streets.

Kelchner emphasized that some of the services will be by referral, not at The social hall building of Highlands UM Church will be the new home for the Navigation Center three days a week. the church building, such as substance abuse treatment and housing needs.

This organization will be working with an already established service group in Highlands, the Marcelous-Williams Resource Center. Tammy Guidry from that group is scheduled to be a Case Manager for homeless persons who come to the church.

The Navigation Center will open in two weeks, on October 3rd, and provide services three days, Monday, Wednesday and Thursday from 11am to 3pm.

Kelchner said that services will be provided to men, women, children, and veterans. He pictures this center as one of a series of help centers to be established in Harris County and nationwide. In the city of Houston there is already a Navigation Center, functioning in a similar manner to this one. It is expected that these centers will reduce homelessness population in the long term. Some believe this will also reduce minor crime in the area, but Kelchner said statistics do not relate the two problems.

A number of supporters are behind the Navigation Center, including Hearts and Minds, ExxonMobil Baytown, Lee College, Chick-Fil-A, the Harris County Sheriff’s Office, and Harris County Pct. 2. The Center will be working closely with the Sheriff’s HOT group, know as the Homeless Outreach Team.

The Center is now funded by grants and donations, Kelchner said, and encouraged anyone who wants to volunteer or donate to contact him, at 832- 464-5994 or at www.givelify.com.

Kelchner will be working with Eddie and Ramonia Williams at their Resource Center on Main Street. Kelchner is a retired educator, and has for several years dedicated his life to helping the needy. He says the new center will focus on help with Spiritual Guidance and Spirit. Homeless will be asked what their needs are, and the center will try to fulfill the needs based on a Life Plan that the homeless person commits to.

If you are a homeless person, or know one that needs help, you can call the Navigation Center at 832- 464-5994 or go to the church, at 107 W. Houston Street, near the corner of Main Street in Highlands.