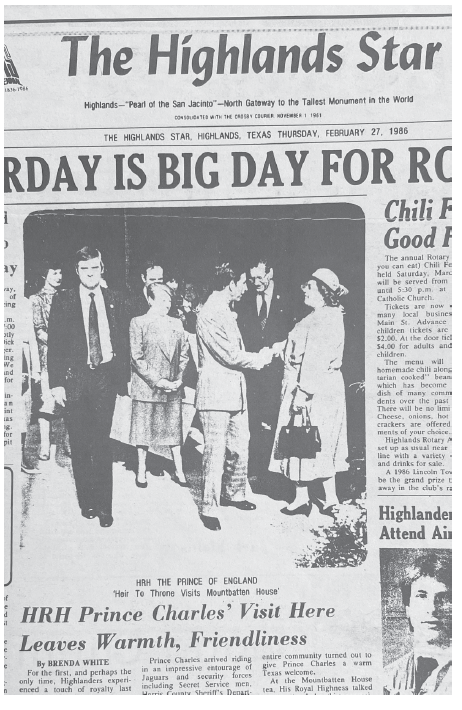 HIGHLANDS – With the death of Queen Elizabeth II, and the assencion to the throne of King Charles, many persons in Highlands are remembering the visit that Charles, then Prince, paid to the Mountbatten House on Maple Street in Highlands in February 1986.

Due to the interest in the subject, we are reprinting part of the Front Page of the Highlands Star of February 27, 1986, and below the text of the article that was included:

For the first, and perhaps the only time, Highlanders experienced a touch of royalty last week.

His Royal Highness, The Prince Charles, Prince of Wales, eldest son of Queen Elizabeth II and Prince Phillip, Duke of Edinburgh, visited Highlands for approximately one hour on Wednesday, Feb. 19 (1986). The Prince came to an afternoon tea held in his honor at Mountbatten House, a retirement home under the auspices of The Daughters of The British Empire.

At the Mountbatten House tea, His Royal Highness talked with each of the thirteen residents living there. All of the invited guests were also singled out for a royal handshake and a few words with the Prince.

As he left the tea, the Prince surprised everyone by stopping to visit with some of the people waiting along the street. Many of them had been waiting for hours hoping to catch just a glimpse of the Prince.

People who were priveleged to chat with HRH were left with an impression of warmth and friendliness. The ability to project such a feeling, is a credit to Prince Charles. When you contemplate the tight schedule he keeps, the hundreds of personal greetings he extends, one might wonder how he can even continue to maintain his famous smile.

Although some complaints were heard concerning the rapid pace of the motorcade, the day may be remembered as an over-all success by most Highlanders.

His Royal Highness has completed his five day visit in Texas with festivities in San Antonio and Austin.

As he ends his second visit to our state, hopefully The Prince will return home with a favorable impression of Texas warmth and hospitality.