THEME: FALL IN LOVE WITH HIGHLANDS! 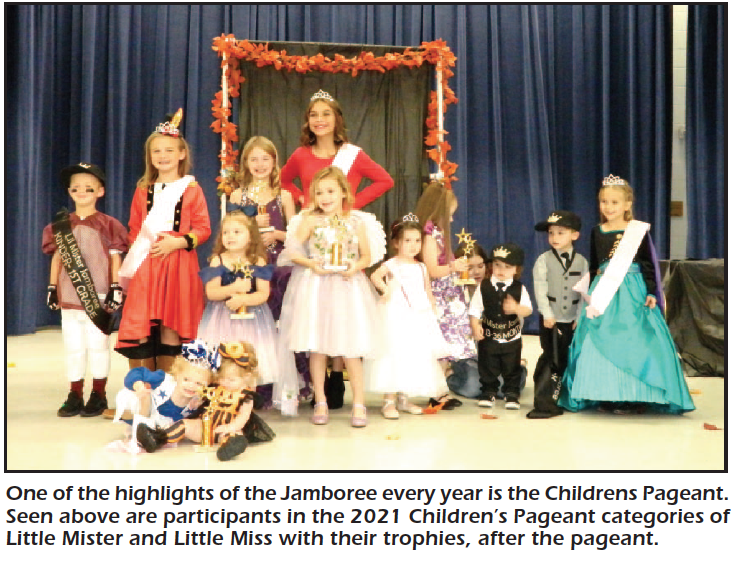 HIGHLANDS – The Highlands/Lynchburg Chamber of Commerce is busy this week preparing for the 65th Annual Highlands Jamboree, held every year since 1955 except for the Pandemic in 2020 and one other year in 1956.

According to Chamber director Jessica Woods, the event has returned to its traditional schedule of the first Saturday in October. Last year it was moved back to the end of October due to COVID, and combined with an Halloween event.

The theme this year is “Fall in Love with Highlands,” a bow to the return date of October 1.

The Jamboree will have most of the usual events this year, including a Parade on Main Street starting at 10am, and a Crafts fair with booths of food and memorabilia, as well as crafts made by area artisans. There will also be a silent auction. The Jamboree benefits the Chamber activities.

Starting at 12 noon in the Cafeterium of the Elementary School, the Little Miss & Mister Pageant will be held, with children ages 0-12 competing in six categories. The Pageant is under the direction of Linda Gwaltney, and benefits the Cristen Bickerstaff Scholarship fund. Entry fee is $30, contact Linda at 281-468- 8593. The parade floats will compete in six categories: Best of Theme; Non-Commercial; Commercial; School Spirit; Antique/ Classic Car; and Modified or Race Car.

Unlike previous years, the parade will not have Miss Highlands Pageant contestants, as the event has been postponed until later in the year, according to the sponsor group, Highlands Horizons. Miss Highlands Haley Maxey, and Jr. Miss Highlands are expected to appear and help with this year’s festivities.

The parade lineup begins at 9am at the B.P. Hopper Primary School on E. Houston Street. At 10am it proceeds south on Main Street to Jones Road. Awards for best floats are presented the the Jamboree Fair/ Expo at 12 noon in the HES Cafetorium. After the parade, activity moved to the Highlands Elementary School multipurpose room. There was a silent auction, exhibitors booths from Precinct 2, and vendors with food and crafts.

The highlight of the day was definitely the Childrens’ Pageant, with Lil Mister and Lil Miss strutting on-stage to the delight of the audience, filled with family and friends. Several hundred attended the show, taking pictures and cheering for their favorite child or grandchild. Emcee for the Pageant was Miss Highlands Haley Maxey, with the assistance of Pageant Chairwoman Jessica Woods