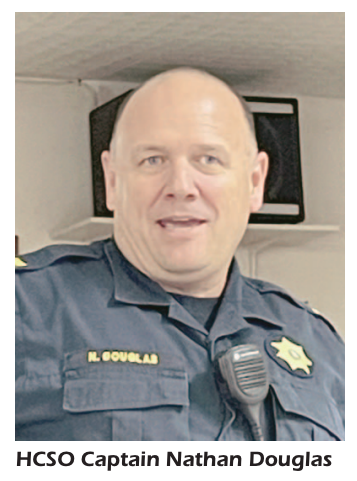 Captain Douglas spoke about the current state of policing and crime in our society, and of his own career in law enforcement.

Douglas is Captain over the Patrol District III, where he has worked for over 31 years. This district extends from Huffman on the north, to Pasadena and almost to Pearland on the south.

Douglas is a native of Clear Lake and keeps busy in off-hours as assistant chief of the Seabrook Volunteer Fire Department.

Douglas describes his peace-keeping role as “Top Cop — like the small town Chief of Police.” His department is headquartered at the courthouse on Wallisville Road, and has 130 personnel that protect residents and property on the East side of the county.

In 1999 the Space Center Rotary Club named him the Officer of the Year, and in 2020 Governor Abbott appointed him to the Texas Emergency Services Retirement System Board of Trustees.

Douglas spoke to the Rotarians about the problems of enforcing laws and reducing crime in today’s society. He said that all police departments are dealing with manpower shortages, with retirements and attrition, and the difficulty of attracting new recruits. Although he