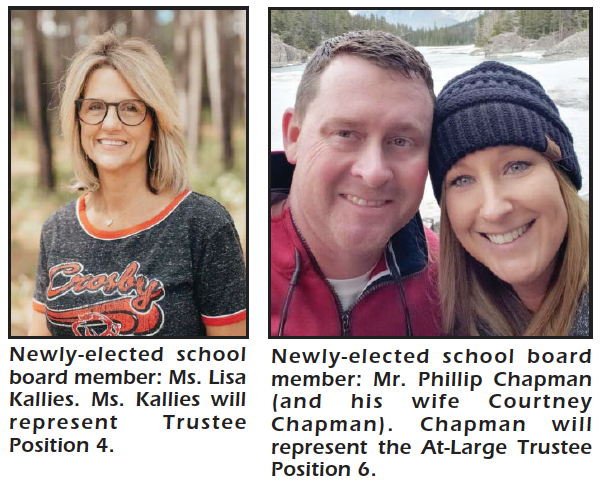 I want to introduce and welcome two new members of the Crosby ISD Board of Trustees. Mr. Phillip Chapman and Ms. Lisa Kallies were elected in the November 8th General Election and will be sworn into office this month. Mr. Chapman is a long-time construction manager who will serve in the At-Large Position. Ms. Kallies is an educator who spent 21 years with CISD before retiring from Newport Elementary. She will represent Position 4. We appreciate both Ms. Kallies and Mr. Chapman for donating their time and talent to better the Crosby ISD communities. I look forward to working with both of them and our entire Team of 8.

Mr. Chapman and Ms. Kallies will serve in seats previously held by retiring Board members, Vice President Mr. John Swinney and Trustee Ms. Christina Castillo. Mr. Swinney retires from the Board after eight years of service. Ms. Continued. Castillo leaves the Board after two years of service. We thank them for being fierce advocates of education and taking so much pride in our students and staff.

I want to pass along the District’s condolences to the family of former Board President, Mr. John Lindsey. He and his wife and daughters were all graduates of Crosby High School. He loved to brag about our District and served faithfully for 14 years on the Board of Trustees (2004- 2018). He set a great example of volunteer service.

This month, I was honored to speak with Crosby Middle School students who were being inducted into the National Junior Honor Society. The students earned a 3.0 to 4.0 GPA and represent the five attributes to achieve membership: Outstanding Scholarship, Character, Leadership, Service, and Citizenship. It was a pleasure to see them join the Society at a young age, well on their way to being future leaders of Crosby and Barrett Station. Later this month, the Board of Trustees will celebrate and recognize the achievements of students at Crosby High School. From FFA to All- District athletes to top scholars, we’ll salute major successes this fall.

It’s remarkable when you consider Christmas is only about two weeks away. We are in the heart of testing season at Crosby High School, as students take end-of-semester final exams. Crosby ISD will have two early dismissal days, on Tuesday, December 20th, and Wednesday, December 21st. Crosby High School and Crosby Middle School students will be released at 11:25am, and students at our elementary schools will be released at 12:20pm both days. The Winter Break will run from December 22nd to January 4th. Teachers and administrators return on Thursday, January 5th, and Friday, January 6th for Staff Development Days. We’ll welcome students back to class on Monday, January 9th.

’Tis the season for holiday concerts and performances. Crosby High School Performing Arts Center. The concert is free for everyone. Earlier this month, the Crosby High School Choir performed their Winter Concert. The choir is blossoming with larger participation this year. Our elementary schools are also holding holiday performances at each campus this month. It is a joyous time to hear the songs of the season performed by our smallest Cougars.

My grown-up Christmas list is simple: may the last few weeks of December bring your family peace and joy and dreams of what we’ll achieve in 2023.

We are Better Together! Go Coogs!