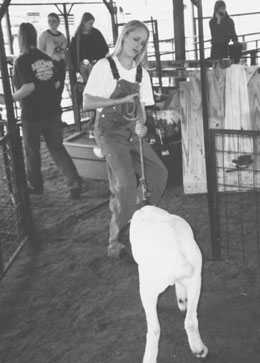 CROSBY  The Crosby Fairgrounds hosted the Huffman FFA Livestock Show on Friday and Saturday for the first time, and the turnout for Saturday’s auction was tremendous.

The Fairgrounds were packed throughout Saturday as parents, entries and buyers poured in mass into the area to view or display livestock raised by Huffman students in efforts to raise scholarship money. Artistic and craft production was well represented this year.

A good example of agrarian science and livestock development was demonstrated by Grand Champion Lamb by Marsi Campbell. The lamb was purchased by the Law Firm of Purdue, Brandon and Frazier. The Grand Champion Broiler was raised by Cory Long and bought by Hi-Tech Pump & Crane.

Reserve Champions were not far off the Grand Champion standard. Mindy Holman’s swine was bought by the Campbell Family.

Samantha St. John grew the Lamb and Triple K Roofing bought it. The goat was raised by Courtney Ashley and bought by the Law Firm of Purdue, Brandon and Frazier. Chase Griffin raised the broilers and Karen Jackson bought them. Rabbits went to Heather Bocci and bought by the partnership of ladies called Biddin Broads.