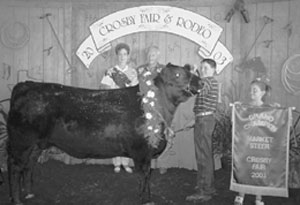 CROSBY  The Crosby Fair & Rodeo Board awarded seven new scholarships, sold the Grand Champion Steer at an all-time record and had good attendance to the rodeo sport and concert shows in spite of rain and rumors.

The Crosby Fair & Rodeo is dedicated to the future of our cause, our community and stronger than ever before. said Doug Hall, Chairman of the Board, We aren’t going anywhere, we’re going to be here for the long haul.

According to Luther Brady Jr. the 57th marked $101,000 in scholarships presented to students of Crosby and Huffman since the board started and added We want to thank everyone that showed up for the auction and the shows for making it possible.

Rain pelted each night of the show but that didn’t stop dedicated sports and concert fans from attending. Although Friday night was lighter than usual, owing to the storm. Thursday night was larger than usual with much of the draw credited by attendants to Gene Watson of Baytown being the opening act. Saturday night, concert fans packed in to see a rollicking performance by Patrick Murphy and Cross Canadian Ragweed

According to Gary Clifton, Overall it was a success. We had a lot of new faces and kept our traditions. Including the tradition of bad weather. People fertilizing grass or hay really appreciate us putting on the show because it brings more rain every year. The 57th will go down as a prolific and profitable year. We are looking forward to next year. The large crowd that attended Saturday night pushed back the effects of Tropical Storm Alison, it was very gratifying for us older board members to see that we had turned the corner from weaker years.

This year, the Crosby Rodeo Queens Contest attracted five lovely and skilled equestrians. Misty Watkins was crowned Queen. Kathryn Morrison was Duchess. Most photogenic went to Andrea Deajon. Horsemanship also went to Misty Watkins. Nicole McGinty was Miss Congeniality. McGinty paid the cost of taking her award, on Thursday night she sprained her ankle following a hard ride. The spunky rider didn’t let that stop her though, not only did she perform well the next two nights, she delighted everyone with her presence. Also recognized for her participation was Julie Glover.

According to Mary Wright, The Queen’s Contest was determined by judges based 40% on Horsemanship, 20% on personality and appearance, and 40% on an interview.