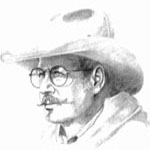 Boy, I am one lucky cowboy! I traveled all over Texas in the last nine days with my wife and daughter and son-in-law, and saw some of the prettiest country and the best people in the world. After all, this is Texas, you know!

We left Friday, June 6th, and drove to ol San Antone where we did the tourist thing, (something Im not cut out for), and did the Riverwalk. We also payed tribute to my ancestor, Davy Crockett and the Alamo. By the way, did you know Alamo means, cottonwood? I sure didnt.

Well, we also got to visit the Texan Days Festival at the Museum of Texan Cultures and went up in that Hemisphere thing where you can see for about eighty miles. While we were waitin at the entrance, I took off my boots, rolled up my jeans and waded in the fountain. Some local folks musta liked that cause they made me pose for pictures. Only after I got out did someone show me the sign that said, NO WADING. Im sure glad they didnt catch me!

It was really nice to slow down. We then drove to Galveston and stayed in a friends little beach house. Turns out it was one of the biggest places on West End with all the best of everything. Sure is nice to have friends, aint it?!

Miss Judy and I caught a plane on Thursday and flew to Amarillo where we were picked up by the fine folks from the Cal Farley Boys Ranch. In case you didnt know, Cal Farleys Boys ranch is an amazing place. It is home to over 400 boys and girls who have been abandoned or whos parents have given them up. They are the best young people I have ever met and the Ranch is a city in itself. They grow most of their beef and much of their vegetables as well as have their own school district. The town was formed in 1939 by Cal Farley on the old Tascosa townsite.

I was privileged to be invited to perform, teach and assist in their Second Annual Youth Cowboy Poetry Gathering. I worked with the best of the best. Folks like Red Steagall, R.W. Hampton, Don Dane, J.W. Beeson, Jeff Gore, Trudy Fair, Trey Allen and Stephanie Davis, just to name a few.

I am changed by my time spent at Cal Farleys Boys Ranch and you can find out more at their website.

We flew back Sunday and went directly into rehearsal with the Baytown Little Theater for the August presentation of Annie Get Your Gun. Its gonna be a humdinger! Ill let you know more, later on.

Finally, Im lookin forward to seein a bunch of you all who like great Texas music on Saturday evening at Lyin Larrys. None other than Doug Supernaw, one of my fav-or-ites, will be on stage. Cost is about $15, a real bargain. But you might want to get your tickets asap, since theres only room for about 400 or so. Hope to see yall there! Be sure and say howdy, ifn you see me.

Lotsa other good things happenin, but Ill tell ya when I see ya next.

Gotta go slog through the mud and feed my babies, so Id appreciate it if youd shut the gate and Ill see ya down the trail.