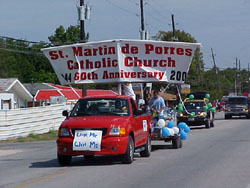 BARRETT STATION — Residents of Barrett Station had the opportunity to remember the past while looking to the future during this past weeks Homecoming celebration.

On Saturday, following a parade down Crosby-Lynchburg Rd. which featured over 50 entries not counting horse riders and ATV riders, over 800 people attended festivities at the Riley Chambers Community Center.

The center point of the festivities was the unveiling of a community revitalization plan conceived by the Barrett Station Vision Team and Harris County Community and Economic Development Department.

Willie Goodlow, president of the Barrett Station Civic League said that they have been working with the county for the last five months to develop a five-year plan to revitalize the community. Goodlow said that groups within the community have been looking at ways to improve the community for the past seven years and that with the recent partnership with Harris County Precinct 2 Commissioner Sylvia Garcia they hope to make some progress on some of their top priorities.

Goodlow said that the top priorities are improving drainage, installing lights along the major thoroughfares and improving traffic flow in the community.

One of the biggest problems Barrett Station faces, Goodlow said, is that there is limited road access in and out of the community. If FM 2100 goes down, she said, there is no way for people to get in and out of the area. This problem was demonstrated in 1994, Goodlow said, when a pipeline exploded on the San Jacinto River. Emergency officials shut down traffic on FM 2100, preventing residents from returning home and trapping residents in the community with no way to leave. Goodlow said that Barrett also faces the problem of its streets being too narrow. There are a lot of places where when school buses drive down the street you have drive on the shoulder or stop and park, she said.

In addition to infrastructure improvements, the Vision Team also identified housing, education and public safety as issues that needed to be addressed. Preliminary plans for a library, an affordable housing subdivision and landscaping were also discussed.

The need for youth outreach programs and local healthcare facilities were also targeted by the committee. The committee also said they would like to a see a spray park in Barrett. Spray parks have grown in popularity in cities on the last few years due to liability concern with operating a swimming pool.

In each of the five years which make up the plan, specific goals have been set. In year one alone, the committee would like to see street signs installed, a community beautification project which would include landscaping and expansion of existing trash pick-up programs, a homeownership campaign which would not only teach people how to buy homes but assist in down payments and securing home loans and job training.

Estimated cost for year one projects could reach $1 million.