Tragedy on FM 1942 linked to inattention 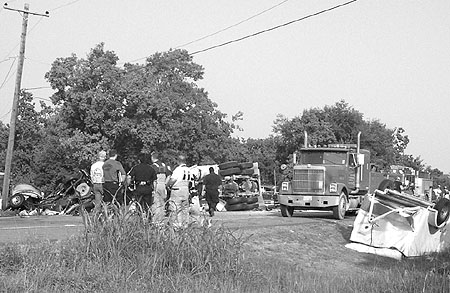 CROSBY — It takes only a couple of seconds inattention on area roadways to turn a pleasant ride in the country into a fatality.

At 3:15 p.m. July 15, that premise became a reality for Scott Kirk Caudle. The blacksmith that lived in Baytown was pulling a trailer behind his gray Ford F-250 pickup but was pronounced dead by emergency workers at the scene by the time deputies arrived at 3:28 p.m.

The force of the collision caused the trailer to become dislodged from the F-250 and it hit the rear of the F-250 and continued Northwest across the roadway to the Southeast side bar ditch.

The cement mixer driven by Luis Fernando Ramirez crossed the roadway and landed on it side on the Northwest side behind the pick-up. Injuries to Rameriz were unknown. He was transported to San Jacinto Medical Hospital by Crosby EMS.

FM 1942 is a link between Mont Belvieu, Baytown, Crosby and Barrett Station. Often the two single lanes seperated by a two foot painted median are used to avoid heavier traffic on other alternates  when speed limits are exceeded dangers are manifold or as one paramedic once said When there is a wreck on FM 1942 it is usually really bad.