New officers, board at Highlands Rotary 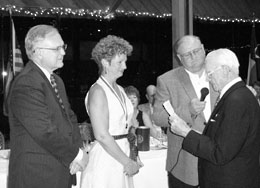 HIGHLANDS – In continueation of a tradition that started over 50 years ago, the local Rotary Club has installed Patricia Herndon Scott as their new president for 2004-2005. But this year the installation had an added feature – PatriciaÕs father, retired Highlands dentist Dr. W. L. Herndon, who is a past president of the club, participated in the swearing-in ceremony.

Dr. Herndon was in active dental practice in Houston, and a leader in Highlands Rotary, from the late 50Õs until the mid 80Õs. After his retirement, Dr. White and Dr. Sutton continued serving his patients. He was president of the club in 1956-57. Both he and his wife Nell are Paul Harris Fellows.

In addition to the president, officers and board were installed, and recognition awards were made for service to the club and the community.

The Highlands Rotary Club has distinguished itself by raising over $300,000 for community projects. It is also known throughout the 55 club Houston district 5890 for its Chili Feast and truck raffle, which raised more money per member than most any other district club.