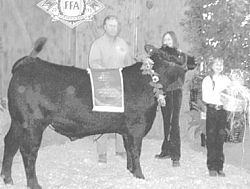 HUFFMAN  The Future Farmers of America welcomed an excited and cheerful crowd on Feb. 26 even if the drizzle continued throughout the 33rd Annual Huffman FFA Livestock Show and Sale.

A grand parade of cakes, steers, swine, lambs, goats, chickens and rabbits toured the exhibition ring before a throng of eager buyers and cheering spectators, hosted by the local ag departments.

Local Ag Science teacher Kristi Hart, 26, will tell you that the money raised during the auction goes to the student that raised the animal.

Kasie Myers brought forth the Grand Champion Steer that was purchased by Hazelwood Dodge for $4,800. The previous record was $3,600.

Zack Mengel, 15, was smiling when a barbecue pit became Grand Champion Ag Mechanics Project and when it sold with added benefits of free coating and delivery thanks to a generous under coating company.

Crosby Office Supply purchased a Pen & Ink likeness of a Buffalo that was Grand Champion Art. Said Susan Armstrong of her new masterpiece, “You know, years ago the Crosby team was the Buffalo. I thought I’d put it in a nice frame and hang it in my store.”

Brittani Bumpas flashed a grand champion smile when her Swine sold for $2600. She has been showing pigs for the last three years. Having found herself taking third place last year, she was looking to take a reserve place this year. The Grand Champion Lamb sold for $1700 and the GC Goat went for $1400.