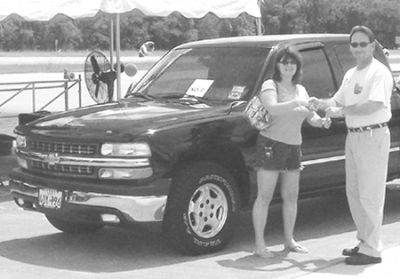 By LEWIS SPEARMAN
CROSBY  John Keating Chevrolet celebrated 14 successful years in tandem with Joe Keatings 1966 establishment of the family tradition here of Famous for Fairness.
The 14th Year Anniversary Clearance Sale was held from August 17 through 19. Special incentives and discounts were in effect for the period.
I have a lot of friends Ive made during the past few years, and I cant think of a better way to say thanks than to put them in the new car they deserve…regardless of credit problems or hard times, said John Keating.


At last Saturdays event, the dealership offered hamburgers, hot dogs, and soft drinks with a background of Rock and Country Music played by local talents Crazy Train. Customers dropped by in waves.
The Keating family tradition of referral from satisfied customers sprouted seven Keating dealerships beginning in 1955 when brothers Joe and Paul Keating retired after long careers from Humble Oil in Baytown to form a dealership in Groveton. Paul moved to Winnie and established a dealership that he kept until just a few years ago. Pauls son, John, established the Crosby location in 1992 with the motto, One Man tells another.
Dale Burch, General Sales Manager, stated, We would like to thank everyone that came out and made this a successful occasion. It was nice to visit with old friends and new customers and we trust it was as pleasant for everyone as it was for those of us working here. We would like to invite everyone to come out and experience why so many family and friends send those needing a car to us.