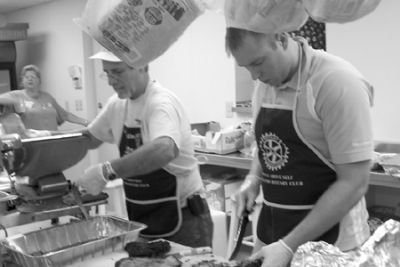 Highlands Rotarians Charlie Ward, and Aaron Cole, help prepare dinners as part of the East Lake Houston July 4th Celebration held on June 30.
During the celebration SonHarvest Church honored area veterans and their families with a barbecue dinner.
In keeping with the community theme, several groups from Highlands joined in the celebration, both as part of the parade as well as in preparation of the dinner.
Hundreds of veterans and their families were fed during the dinner, which organizers say they expect to make an annual event.
In addition to the parade and dinner there was also a huge tailgate party, weenie dogs races and games for children.