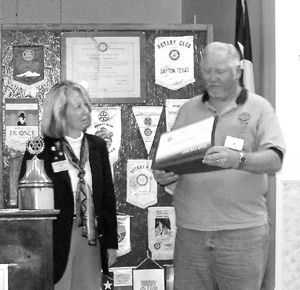 Past District Governor Suzi Howe presents an award certificate to Johnny Gaeke, past president of the Highlands Rotary Club. The Award announced that the Highlands Club, in 2006-2007, raised more money per capita for the international Rotary Foundation than any of the 57 clubs in the district. The amount of $383.79 per member was very close to the record amount for the whole world, which was about $400 by a club in Brazil. The Rotary Foundation funds humanitarian projects worldwide.