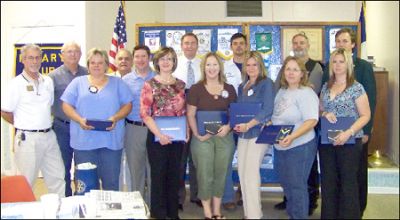 HIGHLANDS ROTARY CLUB was recognized last week by the Houston District 5890 for another accomplishment. All members of the club are now Paul Harris Fellows, a distinction that has national and international meaning in the Rotary Organization. Paul Harris was an attorney that started Rotary in Chicago, over 100 years ago. He is honored by having this award named for him. Any Rotarian that donates $1000 to the Rotary Foundation receives the recognition that they carry with them for lifetime. Pictured above are the recent Fellows that brought the club to 100%. Left to Right, Charlie Ward, president, Robert Woodall, Lisa Vickers, Sam Al-Rasheed, Jeremy Rosenkranz, Denise Smith, Aaron Cole, Michelle Lomazoff, Mathew Forastiere, Teresa Griffith, Debbie Allen, Stefan Cochran, Amanda Anderson, and District 5890 Governor Jeff Tallas. Tallas made the award presentation on behalf of the 58 clubs that are in the District. Not pictured: Tom Hill, Betty Brewer. All other Highlands Rotarians are already Paul Harris Fellows.