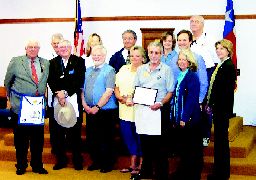 HIGHLANDS Sampson Lodge 231 of the Masons gives an award each year, the Community Builder Award, to a person or group that has contributed to the growth and overall welfare of the community. This year the award went to the Rotary Club.
Presentation remarks were made by Travis Major, and Kenneth Fielder. They also pointed out that the lodge will celebrate its 150th anniversary next year, and is the 6th oldest masonic lodge in Texas.
Previous recipients of the Community Builder Award include Gilbert Hoffman, Harvey Little, Joe Hausberger, Maurice and Jenny Robbins, Wanda Asbeck, Highlands Volunteer Fire Department, Pilot Club, Raymond Gonzalez, and the Henderson Cooking team.