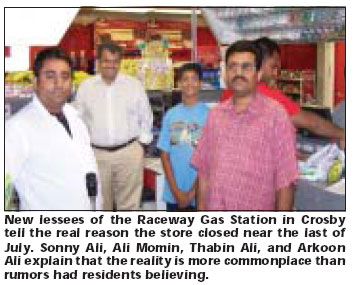 CROSBY  When the Raceway at FM 2100 at U.S. 90 closed in the last days of July rumors went flying that did not square with the facts.

Closing occurred about the same time as state agencies closed a few stations in the Greater Houston Area but not locally.

The first rumor was that the station had been closed due to state inspectors determining that what was selling as gallons were less than Texas approved gallons, apparently confused with a Houston station at about the same time. The next rumor was about selling cigarettes or alcohol to minors, again based on another gas station in west Harris County.

The reality was that the first lessee passed away, his son grew tired of operating the station under the contracted rigors of 24/7 in 365 a year at a high rent, according to Sonny Ali.

The Alis not only got a better rent from the owner, Raceway Inc., but took over as gas rates began to wane and were first in Crosby to offer regular pump price below $3.50 a gallon.

The gasoline at Raceway is owned by Raceway Inc., sold by the renter and the renter prospers by internal sales.