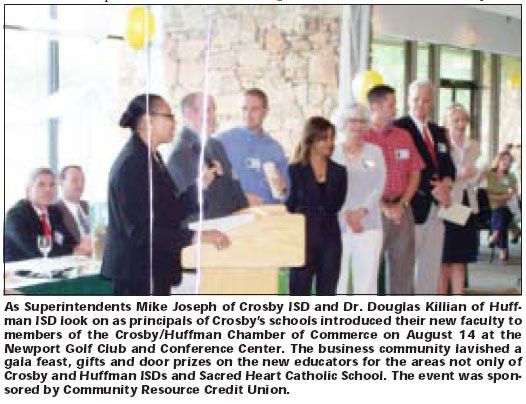 CROSBY – The Crosby/Huffman Chamber of Commerces New Educators Luncheon at Newport Country Club and Conference Center this year was a showcase not only for the new personnel at local schools but also a display of the importance of education in the local communities and the interest of the business community to integrate these professionals into the commerce of the areas.

Justin Brady, President of the local Chamber, initiated the event describing the municipal services performed by the schools in the community.

The event introduces the teachers to the products and services available in the communities they serve in effort to establish a symbiotic relationship between the entities of local education and local dealers hoping for mutual interest to blossom.

The event was hosted by the Crosby-Huffman Chamber of Commerce. The chamber holds the event each summer to welcome new educators to the area and introduce them to local businesses.

Superintendent Mike Joseph summerized the event well by saying, The district is excited about all the quality new teachers for the 08-09 school year. We are also thankful for the Crosby-Huffman Chamber of Commerce because events like this make the Crosby-Huffman area a special place to live. The district appreciates all the efforts by the Chamber to recognize the schools and the community.

School administration and staff were introduced by the aforementioned superintendents in addition to Ken Waguepack, Principal of Sacred Heart, a new educator himself, and Dr. Shirley Ellisor of Holy Trinity Episcopal School.