Rotary Chili Feast – A Day of Fun in Highlands 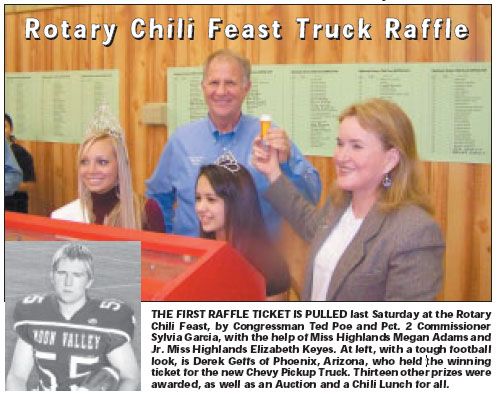 It was a day of fun and socializing with the residents of Highlands last Saturday at the 34th Annual Rotary Chili Feast, held at St. Jude’s Church Social Hall on Main Street.

The annual tradition was well attended, and the attendees enjoyed the usual delicious chili, cooked by the Rotary Cooking Team, headed by Chester Stasney and including Stefe Cochran, Jeremy Rosenkranz, Raymond Gonzalez and Johnny Gaeke. (Editor’s note: the Star-Courier was in error last week attributing the cooking to the Henderson Cooking Team.)

A live auction was held, with Lynn Spell as the auctioneer. A silent auction also had many unique gift items, some themed for the upcoming Valentine’s Holiday.

Chili was served by the Inter-Act Clubs from Chinquapin and Goose Creek Memorial, and desserts by the Rotary wives. Boy Scouts helped set up and clean up the hall.

The main event of the day was the drawing for the new 2009 Chevy Silverado Pickup Truck, from John Keating Chevrolet in Crosby. Only 600 tickets were sold for this raffle, and most of the audience had an interest as each ticket was pulled individually. Prizes were awarded for the first and every 50th ticket thereafter, with the following results: