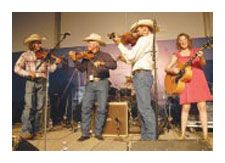 CROSBY – The Crosby Rodeo hosts their Annual Spring Dance on April 11, after Good Friday and before Resurrection or Easter Sunday known as No-Name Saturday.

Get all bright eyed and cotton tailed and hop over to the American Legion Hall in Crosby, just South of the Fairgrounds from 9:00 p.m. until 1:00 a.m.

Jody Nix and the Texas Cowboys will play Western Swing Dance music, a style developed in the 40s and 50s by Bob Wills and Hoyle Nix. Jody Nix began his profession career playing with his dads band, West Texas Cowboys, 5 nights a week from the time he was eight years of age. Among those in his band are Johnny Cox, one of the best steel players in the world. says numerous C&W Magazines.

Nix and The Texas Cowboys were tapped by the Texas State Society Black Tie & Boots Ball for then President George Bush.

David Glenn opens for Kevin Fowler Thursday, June 11. The self described Texas-Nashville Style singer song writer is an avid outdoorsman that likes golf, hunting, fishing and dirt track racing. He likes a range from George Jones to Lenny Kravitz and lots of people in between.