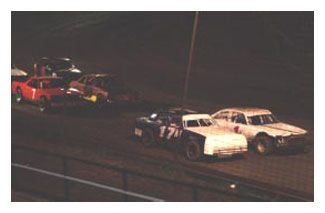 HIGHLANDS – That was not the sound of war but of Battleground last Saturday night as races returned to this area for the first time in three years.

The first winner on the newly modified 3/8 mile dirt track was Roger Kettl in the Pure Stock class. He came from the back of the line, blasting to the front and streaked ahead to take the checkered flag. He traveled with wife and daughter from Vidar, Texas. His family has been in racing since 1949, his personal interest dates back 31 years.

My dad, my grandpa and all my uncles raced in a little bit of every class. I cant get enough of it.  We are going to race here as much as we can. said Kettl.

The wind cut a scourging swarth through the 4000 seat grandstand last Saturday as sprint car dashes gave way to the serious-money modified classes running neck to neck four abreast at speeds that seem entirely too fast to hold the circle. Fans clustered in the pit stands and on the stand walls for a closer view outside the wind chilled grandstand last weekend.

Cheering and excitement rang out as the #2 modified spaced a lead far ahead of the pack in the more expensive cars. The home town crowd seemed most proud to have the racing return and bring in some new guests.