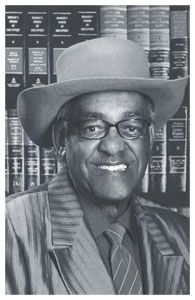 BARRETT STATION  A longtime supporter of Crosby ISD and a former member of the school board was laid to rest this week.

A celebration in honor of John Victor is to be held at Riley Chamber/Barrett Community Centers from 7:00 p.m. until 9:00 p.m. Friday, April 17. The public is invited to this celebration of a life of dedication.

His family moved to Baytown, Texas when John was 5 years old and later moved to Barrett Station in 1951, where he graduated from Charles R. Drew High School. He was employed by Harris County Constable Department, Precinct #3 for over 25 years and was forced to retire due to his failed health.

John was a Crosby Cougar fan, and loved all sports. He served several years as a CISD School Board Trustee where he held various positions.

He was preceded in death by his parents, grandparents and brothers, Curtis Windfont and Howard Thomas Jr.