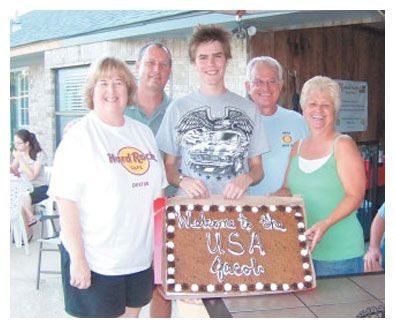 HIGHLANDS ROTARY CLUB will host an Exchange Student this year, from Sweden. Above, a welcoming party was held with Rotarians and the host families. L to R, Kathryn and David Dunlop, Jacob Nordin, and Weston and Delene Cotten. Jacob arrived in the U.S. on Thursday, by way of Chicago. He is from Hoor, Sweden (pronounced HER). This is a village about the size of Highlands, and located in the Southern part of Sweden, about an hour from Malmo and the sea. Jacob and his family have been to the U.S. one other time, visiting Atlanta and the Orlando area. His father is a corporate recruiter, and his mother is an English teacher. Rotarians were surprised at his English, which sounds quite American, due to the fact that his mother was an exchange student in her youth, and picked up the American accent while here. Jacob, 16, has two sisters 9 and 19, and he will be attending Memorial High School while in Highlands. He will also travel to other parts of the United States with a group of Rotary exchange students during the year.