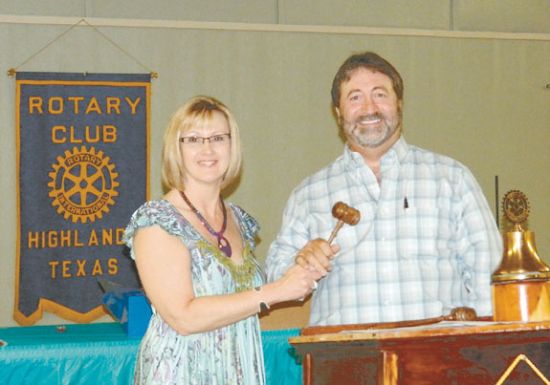 President Smith greeted guests and spouses as the 65 persons attending enjoyed seafood cooked up by the Henderson cooking team at the Baytown Boat Club.

In an annual tradition, Smith reviewed the highlights and foibles of her year in office.

At Christmastime, the club delivered 131 food baskets to needy families.

A major project this year was funding a new Walking Trail in the center of Highlands, beside the elementary school. This was in memory of our friend Mark Mulloy, and used funds he provided. It was also spurred by suggestions from Cindy & Lindy Creel.

Our international projects included helping adjacent Rotary clubs with a water well project in Guatemala, continued support for the eye clinic in Guerrero, providing nets to protect against malaria carrying mosquitoes in Africa, and a joyful and rewarding year with our Spanish exchange student, Mariam Garcia Alfaro.

Awards were given to outstanding Rotarians, and then Dane took his oath of office given by Constable Ken Jones. He introduced his officers and board who were also sworn into office.