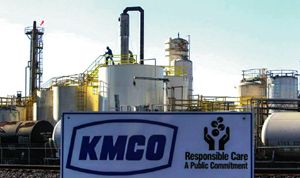 CROSBY  John Foley, President and C.E.O. of KMCO Inc. , a Limited Partnership, sat down with the Star-Courier to address concerns from residents following the release of a study done by the Mary Kay OConnor Process Safety Centers at Texas A&M about potential harm by hazardous materials at local businesses.

While almost everyone agrees that the local Crosby plant at Ramsey Road off of Crosby-Dayton has made significant progress since changing ownership in 2012, Foley spoke of a commitment to our employees and the community that we operate within. There are expectations that the community has a right to expect that we are safe and compliant. 

KMCO has been here for 41 years. Over the last few years incidents have been taken to heart including the fires in August 2008, and Christmas Eve 2010, and the lawsuits over releases in 2008 for spills and fumes. Since 2013, the plant has won industry awards for safety and environmental concerns.

Ive been here a year and we are looking at what are the right ways to communicate and proactively talk to the community. In December we are going to have a drill to practice our emergency preparation so we notified the schools and all so people know what is going to happen. Another group that insists we operate at a high standard are our customers. We mainly work for other chemical companies and if we dont maintain a high standard they wont do business with us. Between the community, our employees and our customers we have at least as strong a drive for safety as laws and regulations.

We are going as fast as we can to discover any risk and figure out how to minimize it. In this business you have to expect people to ask questions. And you have to be able to answer them, so we want to be able to be proactive, said Foley.

Many agencies are vigorous in their efforts to ask us questions. For example the Department of Homeland Security is coming for an audit on June 14. The Harris County Office of Homeland Security comes, the fire departments, the E.P.A., OSHA, TCEQ, all these visit us because we are a major player and we have a lot of interaction with those people. But, we dont count on them to police us to do the right things we do it for ourselves. If you want to operate a chemical facility like we do in 2016, in the United States, you had better be safe and compliant.

One of the initiatives we have undertaken is how do we reduce our inventories of everything. We run processes but then we have about $12,000,000 of different chemicals inventory. The challenge I have made to the team is to get it to three. It leaves us less to risk from a financial point of view and exposure to things like floods. The smaller you can make the pie the less risk there is overall.

Kim George attended the meeting and answered the question of what reforms have been enacted at the plant. New scrubber systems have been put in place to take out the odors that might be emitted from the plant even if they are permitted. The plant has upgraded their digital control systems. They can now monitor release activities from the computer system instead of having to read the monitors out in the locations. Bringing technology into the plant has helped us monitor systems within the plant, the initial investment was over a million dollars.

Master control captures any change, any outcomes from any audit systems that we need to pay attention to. Other things include a new storage tank that is safer and away from the rest of the plant so we can see more tank cars, thus reducing the number of deliveries and the number of connections necessary.

One operation we have been working on is drumming material to ship it off site. We installed an automated drumming system, ahead of regulations. We are looking for ideas on what we can do to reduce risk, make it easier and our workers more productive. said Foley.