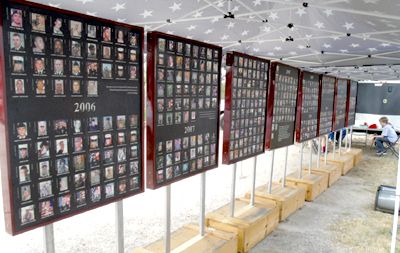 Just Connies Ice House purchased the food for the veterans to sell. Also, the establishment purchased a large cooler to be raffled off to aide the two groups and filed them with the winners favorite beverage.

Veterans of Foreign Wars Frank Kubin Post 9761 fried fish and had a 1957 Chevrolet Sedan for raffle that features 200 tickets for $100. A raffle for a shotgun was pulled that day. Bob Stamply won the shotgun. Contact Bob Slovak at (281) 635-9263 to buy a ticket for the Chevy or any member of the VFW post.

Rolling Thunder, Inc. members have been working on the Wall for a decade. Beginning in 2001 the wall is up to date through 2014 for the War on Terror. Panels begin with World War II and continue through the War on Terror that has the name and photograph of all those that died to keep this county free of terror.

Rolling Thunder Inc.s major function is to educate the public on the American Prisoners Of War after conflicts and to protect future veterans from being left behind should they become prisoners of war-missing in action. They are committed to helping all veterans from all conflicts. Rolling Thunder is a nonprofit organization.