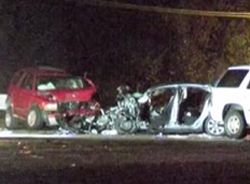 HUFFMAN A three vehicle crash last Saturday shortly before 7:00 p.m. in the 11600 block of FM 1960 claimed the lives of a 7 year old and a 25 year old that had recently moved to the Greater Houston Area.

Authorities say it began as a friend, Courtney Anderson, was driving a Liberty County family west on FM 1960 on wet roads.

Reports indicate a white Yukon sideswiped the grey Mazda sedan causing it to spin into oncoming traffic. A red Dodge SUV then struck the Mazda carrying the family nearly head-on.

The driver of the Yukon offered a blood sample to authorities at the scene. Witnesses describe the man as having been driving aggressively prior to the collision and apparently uninjured by the crash.

The seven year old was treated at Kingwood Medical Center but succumbed to injuries inflicted in the crash. Young Courtney Anderson died during the impact. Everyone else in the vehicle was critically injured including Courtneys best friend, the friends husband and two children. The name of the family has yet to be released and the name of the man facing charges for causing the crash has not been released. The woman driving the red Dodge SUV was also taken to the hospital with injuries.