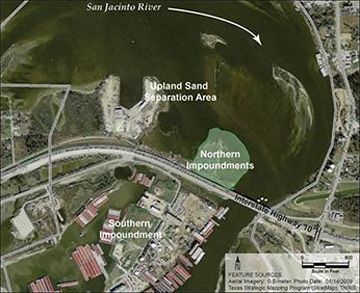 WASHINGTON, DC  Executive Director Scott Pruitt today announced the final decision on the disposition of the toxic waste dumps in the San Jacinto River, near the I-10 bridge.

In a press release dated Wednesday, Oct. 11 the EPA said they had issued a final Record of Decision based on the best interests of nearby residents, local businesses, and downstream resources including the Galveston Bay estuary.

The plan for complete removal of the waste material has been modified to provide cofferdams around the excavation of dry material, instead of wet material in the original plan. The cost is now estimated at $115 million instead of the previous $97 million.

The proposal includes both the Northern and the Southern impoundment areas. 212,000 cubic yards of dioxin contaminated material will be removed from the sites for proper disposal.

Local environmentalists and officials praised the decision of the EPA, including Jackie Young of THEA and the San Jacinto River Coalition. Young has led the fight for removal of the pits for a number of years, prompted by serious health problems she attributes to pollution from the waste pits.

Jackie Young told the Star that she was pleased with the decision, but would continue to be engaged in the issue, and be a watchdog over the removal project.

One opponent to the decision, the KeepItCapped group, issued the following statement:

We cannot support a plan for the site that provides less protection to all affected communities than the existing cap already has provided. We are deeply concerned that the decision announced today could result in a release to the San Jacinto River and downstream areas. We disagree with EPAs claim that the local or downstream areas can be protected during removal. We will review U.S. EPAs Record of Decision in its entirety.

Here is the full text of the EPA press release, and the Final RECORD OF DECISION:

DALLAS  (Oct. 11, 2017) The cleanup plan to address highly toxic dioxin contamination at the San Jacinto Waste Pits Superfund site in Harris County, Texas has been approved. The selected remedy will protect human health and the environment by removing highly contaminated material from the site and securing less contaminated areas. The plan provides certainty to people living near the site by permanently addressing risk posed by the contamination. It also provides certainty to other economic interests including the businesses that rely on the San Jacinto River for navigation and the Interstate-10 transportation corridor.

Today, we are announcing our decision to ensure the San Jacinto site is cleaned up for the benefit of the entire community, said EPA Administrator Scott Pruitt. As exemplified today, EPA is prioritizing Superfund clean-up by making decisions in a decisive, timely manner. The San Jacinto Waste Pits site was added to the National Priority List nearly a decade ago, and I am pleased to announce a decision has been made to permanently address the highly toxic materials to ensure health and safety in the surrounding communities.

EPAs cleanup plan includes installing engineering controls such as cofferdams before excavating almost 212,000 cubic yards of dioxin contaminated material for disposal. A small amount of material will stay on the site where controls will prevent access, eliminate off-site migration and monitor the natural recovery into the future. The estimated cost for the remedy is $115 million and is cost-effective; representing a reasonable value for the cost incurred.

EPAs final cleanup plan, called a Record of Decision, addresses comments on the proposed plan concerning the risk of water spreading dioxin contamination downstream by installing controls such as cofferdams to allow for dry excavation of the waste material. Changes in the construction method will effectively eliminate any potential for spreading contamination to downstream areas. The $97 million proposed plan outlined wet excavation of material.

EPAs decision, fully explained in the Record of Decision, is based on extensive studies of the contamination, human health risks, and environmental risks of this site. The final cleanup plan considers the ever-changing San Jacinto River, which encroaches on the site, and protecting important downstream resources including the Galveston Bay estuary.

EPAs selected remedy will permanently address the highly toxic dioxin waste materials, meets the federal regulatory requirements of the National Contingency Plan for cleanup of hazardous sites, and is protective of public health and the environment. EPA will release an Administrative Record, which consists of all documents used to support its selected remedy.

EPA added the San Jacinto Waste Pits site to the National Priorities List of Superfund sites in 2008, after testing revealed contamination from dioxins and furans near the waste pits. The northern set of impoundments, about 14 acres in size, is located on the western bank of the San Jacinto River, north of the Interstate-10 bridge over the San Jacinto River. These northern impoundments are partially submerged in the river. The southern impoundment, less than 20 acres in size, is located on a small peninsula that extends south of the Interstate-10 bridge. EPA is the lead agency for addressing the site and cleaning up the contamination, with support from several state partners and the U.S. Army Corps of Engineers.

The Administrative Record, including the Record of Decision, for the San Jacinto River Waste Pits Superfund Site is available online at: https://www.epa.gov/tx/sjrwp and at the following locations: