Service to include Channelview, Cloverleaf, and Sheldon and connect with La Porte, McNair, Highlands, Crosby and Baytown

Five new routes are proposed to specifically serve individuals in areas damaged by Hurricane Harvey. They will serve the communities of Channelview, Cloverleaf and Sheldon with approximately 70 miles of additional service for a three-year period. Service start-up will require public meetings take place first. The public is asked to participate and voice their needs.

Two of the three planned public meetings have been set as follows:

END_OF_DOCUMENT_TOKEN_TO_BE_REPLACED

November election will vote on issues from last legislative session

TEXAS – Although it is news to most people there is an election this November 5 concerning the work of the last Legislature passed that must go to voters for approval.

Northeast Harris County will find that the Edith Faye Cook Cole Crosby Branch Library at 135 Hare Road in Crosby will begin hosting early voting on Oct. 21 through November 1. The Polls will be open from 7:00 a.m. until 7:00 p.m.

Traditionally, this is the election for Mayoral candidates and this is no exception but Crosby, Huffman and Highlands have no dogs in that hunt, they are unincorporated.

There are however 10 ballot measures.

END_OF_DOCUMENT_TOKEN_TO_BE_REPLACED

ARKEMA: Safety Board must develop plan for reporting emissions

CROSBY – The Arkema accident continues to have repercussions at a national as well as local level.

The U. S. Chemical Safety Board has dropped an appeal of a federal court decision that requires the agency to regulate the reporting of chemical emissions resulting from accidents like the one at Arkema Chemical Company, in a motion filed August 8th, 2019.

That was related to Judge Amit P. Mehta of the U.S. District Court for the District of Columbia ruled on Feb. 4 that the Chemical Safety Board had to develop a final requirement for organizations to report chemical releases to the agency.

The CSB subsequently tried to get that decision reversed in the U.S. Court of Appeals for the D.C. Circuit.

A lawsuit was filed concerning a chemical release from Arkema Inc. after Hurricane Harvey flooded the area and some inadequately refrigerated chemical decomposed and caught fire. Then they were allowed to explode and some 21 people needed medical attention from exposure to toxic fumes. Plaintiffs in the federal suit include Air Alliance Houston, the Louisiana Bucket Brigade and Public Employees for Environmental Responsibility.

END_OF_DOCUMENT_TOKEN_TO_BE_REPLACED 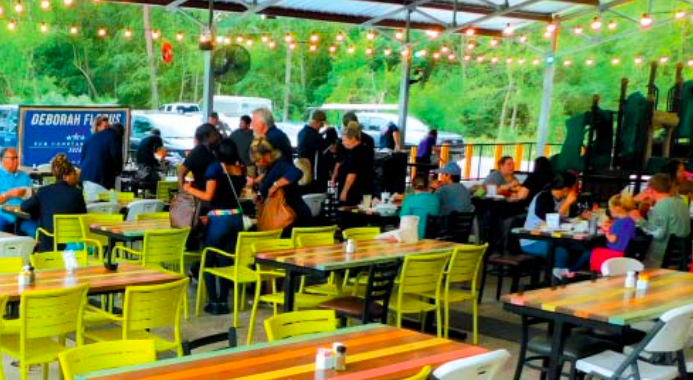 Last Friday, August 23, at Iguana Joes in Crosby supporters turned out for Deborah Florus with Eddie Foster as D.J. to support her campaign for Precinct 3 Constable. Many mainstream supporters are from the more conservative side.

END_OF_DOCUMENT_TOKEN_TO_BE_REPLACED

CROSBY – August 17, the Big Event for the Cody Stephens GBOGH Memorial Fund was a rousing success held at Southern Lace Estates for a night of big band, big auction and big celebration.

A catfish dinner started off a packed program beginning with recognizing this year’s youngsters saved from sudden death by the efforts of the foundation. Awards for those that contributed effort generally in the form of belt buckles.

It was especially a celebration of the passage of House Bill 76, the Cody Bill — also excitement at the passage of House Bill #3 for education — with special recognition of Representative Dan Huberty, R. 127, Rep. Briscoe Cain, R. 128, and State Senator Carol Alvarado, all instrumental in passing the bill that gives parents the right to choose a heart screening for their students.

Cody Stephens, Scott Stephens son, died in 2012 from sudden death. In the last legislative session, the Cody Bill was signed into law by the governor.

The band Modulation, brought back memories, playing larger band sounds, including those from the 70’s band Chicago. Before the event, the goal was to raise about $275,000, but the event went all the way to “a smidgen under $300,000,” according to Scott Stephens.

“The event set wonderful records. The live auction brought in near $85,000 for 43 items. The silent auction brought in over $12,000. These resources will help us screen young hearts all over Texas and place ECG modules throughout Texas where they are needed.”

Sudden death is the #1 killer of student athletes, about 1 in 300 youths have an undetected heart condition that puts them at risk. The standard physical exam/history misses 96% of the youth at risk. Thanks to the generous donors supporting the mission, Cody Stephens Foundation can offer funding for first year screening. Thus far the foundation has screened more than 130,000 people and at least 100 young lives are referred to more extensive care to avoid sudden death. The ECGs are read by board certified Cardiologists.

END_OF_DOCUMENT_TOKEN_TO_BE_REPLACED

An annual tradition, the Crosby-Huffman Chamber of Commerce welcomed new educators with gifts and a special luncheon last August 14.

Pastor Larry Koslovsky of the Brethren Church opened the ceremonies, and an invocation was delivered by Pastor Keenan Smith within his own sanctuary.

See print or PDF edition for educator photos and names.

END_OF_DOCUMENT_TOKEN_TO_BE_REPLACED

TEA, the Texas Education Agency, released school performance ratings based on their new A to F system. Although most of the schools in the Goose Creek ISD received a passing grade, A,B, or C, Highlands parents were upset to learn that their two schools, Hopper Primary and Highlands Elementary, had received a D.

One other elementary, De Zavala, received a D. Receiving A grades were the Impact Early College High School, and Alamo elementary. The District itself got a B rating, as did most other school districts in the East Harris County area. Ratings by the TEA are based on three categories:

END_OF_DOCUMENT_TOKEN_TO_BE_REPLACED

NORTHEAST HARRIS COUNTY– Last weekend’s sales tax holiday found concurrence in nine out of ten respondents that it isn’t measuring up, with the other 10% either very much in favor of the tax break or didn’t know or care about it.

However, stores in Crosby were packed as parents endeavored to get ready for school to start today.

Shoppers and store workers in Crosby and Baytown were asked about what their reaction to the Back to School Sales Tax Holiday was, and their response was educational. Few wanted to be responsible for their opinions or photographed.

One store worker volunteered that the notebooks she was standing near for $2.48 had been $2.20 regular price last week. On the other hand, notebooks that were regular 79¢ were on sale for 50¢. “They move prices, locations and stuff around a lot,” she said.

A grocery store manager in Crosby said, “What do I care about a sales tax free weekend, anymore? We used to carry items for each school in packages, specific to every school, but now only big box stores do that. It encourages their monopoly.”

END_OF_DOCUMENT_TOKEN_TO_BE_REPLACED

CROSBY – Soon locals here are going to get fed up with roadways north and south, east and west, that have stopped functioning as they once had and now result in traffic jams.

A couple of horrible accidents on the IH-10 bridge over the San Jacinto pointed out that there is not enough signal time for very many, if any, to turn left onto US 90. Complaints went to TxDOT and they changed the signal times for the intersection of the Beaumont Highway and Main Street in Crosby.

In turn, the traffic began to back up for miles into Crosby at the intersection for southbound vehicles. These things are hard to regulate.

END_OF_DOCUMENT_TOKEN_TO_BE_REPLACED

HIGHLANDS – The U.S. Environmental Protection Agency (EPA), in cooperation with the Texas Commission on Environmental Quality (TCEQ), Federal, State and Harris County agencies, local officials and industry, plan to hold a Community Meeting for the San Jacinto River Waste Pits Superfund site. During the meeting an update will be provided on current site activities and the cap inspection data.

HIGHLANDS – This month’s meeting of the THEA/San Jacinto River Coalition dealt with potential threats to the integrity of the cap over the waste pits, as the community waited for the slow process of removing the toxic waste to go forward.

Jackie Young announced that she had learned that the Pelican Asphalt Permit, wanting to dredge areas near the Waste Pits, had been approved on July 3 without any further public notice.