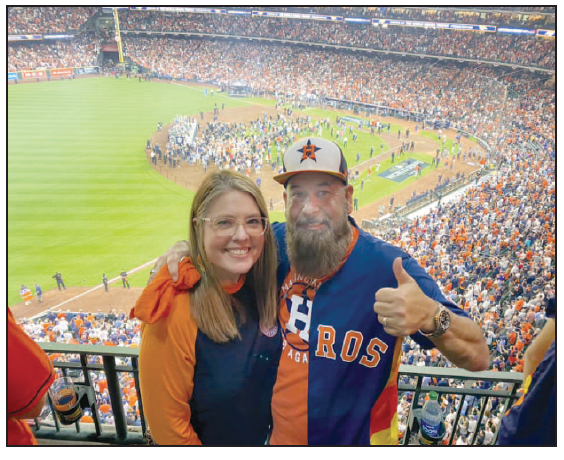 HOUSTON – It was a great night for baseball last Saturday evening, as the Houston Astros defeated the Philadelphia Phillies 4-1 to win the World Series.

Many fans from this area, from Mattress Mack to David and Deonicia Mendez to scores of others watched with excitement as Yordan Alvarez in the sixth inning, with two men on base, homered to the farthest point in center field, and the Astros went ahead 3-1 and led the rest of the way to win the game. Alvarez’s home run went at least 450 feet, and experts say he hit a 98mph fastball sinker. The MVP trophy went to Jeremy Pena, who continued his amazing hitting with a .400 batting average for the series. Fans also saw some amazing pitching throughout the series, with Valdez, Verlander, and Pressley. And who can forget that impossible catch by Chas McCormick against the centerfield wall in Phily?

The fan excitement and pleasure was so thick that most of them stayed for a while after the game, to enjoy the feeling and revel with their friends and watch the interviews on the big scoreboard screen in center field.

Deonicia and David Mendez of Crosby at the end of the Sixth Game of the World Series at Minute Maid Park last Saturday evening. As the Astros team runs onto the field in the background to celebrate the victory, David exclaims “We just witnessed history.” Mendez snagged his tickets at the last minute, a lucky move.