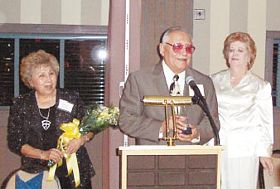 CROSBY – A packed dining room at the Monument Inn attested to the interest that the Huffman and Crosby communities have in their Chamber’s 2005 Awards Banquet, and the annual festivities and good food were enjoyed by the record crowd.

The program was chaired by Chamber president Nancy Oliver, and the banquet was chaired by Don Cox and Jan Cox. Nancy oversaw the presenters and those who receive recognition, and then the new board was sworn into office by Judge Tony Polumbo.