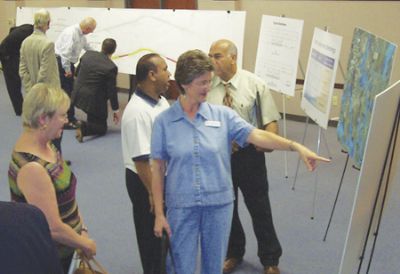 By LEWIS SPEARMAN
CHANNELVIEW  Someone may be able to get on U.S. 90 in Crosby and drive straight through to the I-H10/I-H 610 Interchange by 2008 or 2009 on access roads, according to Texas Dept. of Transportation (TxDOT) officials at a meeting at San Jacinto College on Tuesday.
Plans are now completed to finish U.S. 90 in Harris County as originally proposed as an access facility in 1969. The first of three phases of plans begin letting contracts in January, 2006 at the I-H10/I-H 610 Interchange eastward, and in June of 2006 at Green’s Bayou eastward to the Beltway.


This first phase plan should take about two to three years to complete but will provide access from Beltway 8 to the I-H10/I-H 610 Interchange, mostly on frontage roads. The frontage roads are over bayous and obstructions. However, the freeway will eventually have three main lanes in each direction. No toll way collection (or obstruction) is planned for in the 40 year old proposal.
The tie-ins to access Interstate 10 and U.S. 90 will require a 6% elevation. This portion of the freeway intersection will be constructed of high grade steel, making this early construction by far the most expensive. Some grade separation is planned in the first phase for bayous, and Uvalde Rd. in the access roads.
The other two phases each include grade separations or overpasses for freeways. These will be stretched out over several years, as funding becomes available. They are the final steps in having a freeway all the way to the Interchange. The total $187 million dollar price tag is an estimate of the completed project based on current conditions: rising prices in steel, concrete and gasoline can only increase costs.
No alternative routes are considered feasible given previously dedicated right of ways bought in 1977. A few relatively small rights of way are being acquired for project improvements. No displacements or relocations are expected.