CROSBY– A man who dedicated his life to the youth of Crosby and who made a lasting impact on the Crosby community passed away Oct. 13th at the age of 85.

Services for E.P. Miller, Jr. were held Oct. 15 at the Sterling White Chapel Funeral Home in Highlands, with the Rev. Gregory Megill officiating. Burial followed at the White Cemetery.

END_OF_DOCUMENT_TOKEN_TO_BE_REPLACED

By J.S. Henderson, M.D.
Overweight Children
We have addressed the issue of the epidemic of overweight children in the past. It is such a critical issue that we felt this update would be appropriate with the holiday season approaching. Weight gain is a year round problem, but much of the excess weight gained by American adults and children occurs between Halloween and New Years Day.
It is hoped that this information will help our readers with overweight children avoid a worsening of the problem over this coming holiday season and begin the process of making better eating and exercise habits a permanent change.
How do I know if my child is overweight?
Your health care provider may use a chart to find out if your child might be overweight. Your child is overweight if he or she is heavier than 85 percent of other children who are the same age and height. If your child has bigger bones, he or she may weigh more because of that, not because of too much fat.
What can I do to keep my child from being overweight?
Weight problems can be very hard to fix, so its important to prevent the problem from happening in the first place. Here are some tips to help you keep your child at a healthy weight:
· Dont make your child eat when he or she isnt hungryits OK if not every drink or every meal gets finished.
· Dont use food to comfort or to reward.
· Dont offer dessert as a reward for finishing a meal. Doing this teaches your child to value sweets more than other foods.
· Offer your child a healthy diet. No more than 30 percent of all the calories your child eats should be fat calories. Ask your health care provider or a dietitian to teach you about the right kinds of food to feed your child. Your child needs to get lots of fiber from fruits, vegetables and grains.
· Dont eat at fast-food restaurants more than once a week.
· Limit how much TV your child watches. Try to get your child to do something active instead, like riding a bicycle or playing ball.
· Spend time being active with your childgo on family walks and play outdoor games together whenever you can.
· Teach your child good eating and exercise habits now to help him or her have a healthy life.
How can I give my child better eating habits?
Most of what your child eats depends on what you bring home from the grocery store. Try not to buy foods that are pre-packaged, sugary or high in fat. Instead, buy foods that are low in fat and high in fiber. After your child is 2 years old, skim milk can safely replace whole milk. Make sure all meals and snacks are eaten at the table, and not in front of the TV. Get the whole family to start eating a healthier diet, so your child wont feel alone. Also try to limit eating out  particularly at fast food restaurants.
How can I help my child get more physical activity?
One of the best things you can do for your child is to limit TV and computer game time. Instead, suggest playing tag, having foot races, skating and playing other active games. Encourage your child to join school and community sports teams. Take the whole family on walks and bike rides and to ball games.
J. S. Henderson, M.D.
Center for Family and Preventive Medicine
Affiliate of San Jacinto Methodist Hospital
14626 FM 2100, Ste. C
Crosby, Texas 77532
281-328-2568

END_OF_DOCUMENT_TOKEN_TO_BE_REPLACED

Mr Crosby 2002 Kevin Claunch, and Homecoming Queen 2002 Cherylin Joseph were honored at the Homecoming festivities during halftime at the Crosby-Smiley game.

Cherylin is the daughter of Keri and Clarence Joseph and, after graduation, she plans to study to become a pediatric nurse. Kevin is the son of Chris and Karen Claunch. Kevin plans undergraduate and graduate work at Texas A & M University to prepare for a future in veterinary medicine.

END_OF_DOCUMENT_TOKEN_TO_BE_REPLACED

Crosby- In their biggest scare of the season, the Cougars eaked out a victory over the Golden Eagles of Smiley, final score 39-28, in Crosbys Homecoming game. Cougar head coach, Larry Haynes had this to say after the game, During the homecoming week, the players were preparing to play, not to win.
After trailing 14-0 at the beginning of the game, and 22-14 at halftime to the last place team in District 21-4A, the Cougars went into the locker room shocked at what was supposed to be an easy game. Cougar running back Cleveland Archie said, This just goes to show you that you can never underestimate any opponent. Archie led the team with 95 yards rushing.
After a shaky first three quarters, with the score still knotted at 22-14, the Golden Eagles scored five seconds into the fourth quarter to seemingly put the game away, but as quarterback, Kellen Haynes stated, It seemed like a long shot, but I knew that we had the ability to come through, all we had to do was execute. And execute they did. The Cougar defense would not let Smiley score another point, and rolled up twenty-five points in the final 8:32 of the game, and their sixth victory of the year, and a 2-0 record in District.
Haynes threw five touchdowns and had 183 of his 242 passing yards in the second half. Senior, Chris Destin said after the game, If they were going to cover me man-on-man I was confident that they would have problems. Destin, had 8 catches for 185 yards and four TDs, three of them coming in the fourth quarter.
The Cougar defense, which had been steady all year, was on their heels after the fast start by Smiley, but settled down, and helped seal the game. With 1:26 left in the game, defensive back, Philip Beck, intercepted a pass, and returned it 37 yards for the final touchdown of the game. Beck, deflecting the spotlight off of himself, said, This was a team win. The offense and defense came together to win this one.
With just over a minute left to play, and Smiley with the ball, Linebacker Michael Garcia had the second Cougar interception of the evening to give the Coogs the win. This is my senior year, and I want to help lead the team to the playoffs. I dont want to let my teammates down, Garcia said.
The Cougars will travel to Sheldon to play the 4-3, 1-1 C.E. King Panthers on October 25 at 7:30.

END_OF_DOCUMENT_TOKEN_TO_BE_REPLACED 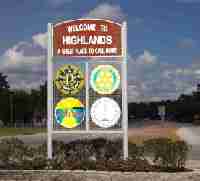 Pilot Club member Theresa Cashion reported that another welcome sign is planned near the landing at the Lynchburg Ferry.

END_OF_DOCUMENT_TOKEN_TO_BE_REPLACED 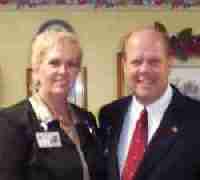 Democratic bus with Sanchez, Kirk and local candidates due in Barrett Station Saturday

EAST HARRIS COUNTY– With early voting opening this Saturday, politicians and hopefuls are expected to be out in numbers shaking hands and meeting voters.

On Oct. 19, a busload of Democrats will be in the area to meet the public. Among thos who are expected to be part of the tour through East Harris County are Congressional candidate Chris Bell, Congressman Nick Lampson, Harris County Commissioner candidate Sylvia Garcia and local judicial candidates.

END_OF_DOCUMENT_TOKEN_TO_BE_REPLACED

Its about time you stuck your head in and said howdy. I been missin you all but my aim will get better! If you didnt make it to the Madisonville Cowboy Gathering, you missed a great time. The whole event was under a large arena like our Crosby Rodeo Arena. There were a lot of great cowboy exhibits including a real chuckwagon, a saddle and tack maker, a knifemaker, a blacksmith, one of the best little horse trainers around, Jody Cunningham and some great live music and poetry. It was FREE. Good price!
Well, theres a really good event coming up for you all who like good shows. This may sound far off, but trust me folks, it will be here before you know it, and it will be sold out. Your Horsefeathers writer is producing and directing a dinner theater show for the San Jacinto College North Campus on February 7, 8, and 9, 2003. There will only be 250 seats each night.
The show is called, A Cowboy True, and will include some great entertainers, the lead being yours truly with an extra special guest from California, Mr. Curly Musgrave. Curly, alone, is worth the price of admission, but there will be other singers and entertainment you are guaranteed to love. Ill have more on this for you the next month or two, but be sure to mark your calendar for this special event, or youll be mad at your ownself!
A special Horsefeathers Howdy to Gladys Adcox for her kind letters. They are a pleasant treat. She reminded me of the story (someone told me it was true), about the Sunday morning when the preacher was gettin ready to step up to the pulpit, when the devil himself jumped up on the pulpit and glared at everyone. Well, the whole place emptied real quick except for one old man on the front pew. He was a’ grinning from ear to ear. The devil was a little surprised but quickly regained his composure and glared at the old timer as he asked, Aint you a feared of me old man? The old man just grinned even bigger and said, Nope. Why not, roared the devil? Why, I been married to your sister for more n thirty years, replied the old man!
Then there was the time George Bush, Ariel Sharon and Bin Laden were walking together on the beach (dont get too cerebral and try to figure how THAT could happen, just enjoy the story!). They came upon something sticking out of the sand and one picked it up and cleaned it off. It was a beautiful brass lamp, from which emerged a genie. Now please dont get too far ahead of me here.
The genie told them he usually gave three wishes, but since there were three of them, each could have one wish. Bin Laden was his naturally lovable self and quickly said he was tired of the infidels bothering his Afghanistan and so he would use his wish to keep them out. His wish was for a wall to be put around Afghanistan with no windows or doors of any kind. The wall was to be five hundred feet tall and one hundred fifty feet thick. Solid, permanent. It is done, replied the genie and Bin Laden stalked off in glee.
Mr. Sharon simply asked for peace in Israel. It is done, replied the genie, and Mr. Sharon smiled.
George W. asked, How big is that wall around Afghanistan? One hundred fifty feet thick and five hundred feet tall, with no doors or windows the genie replied.
W grinned his grin and said, Fill it with water! It is done, replied the genie. And the genie smiled back at W! Happy Trails, Lloyd